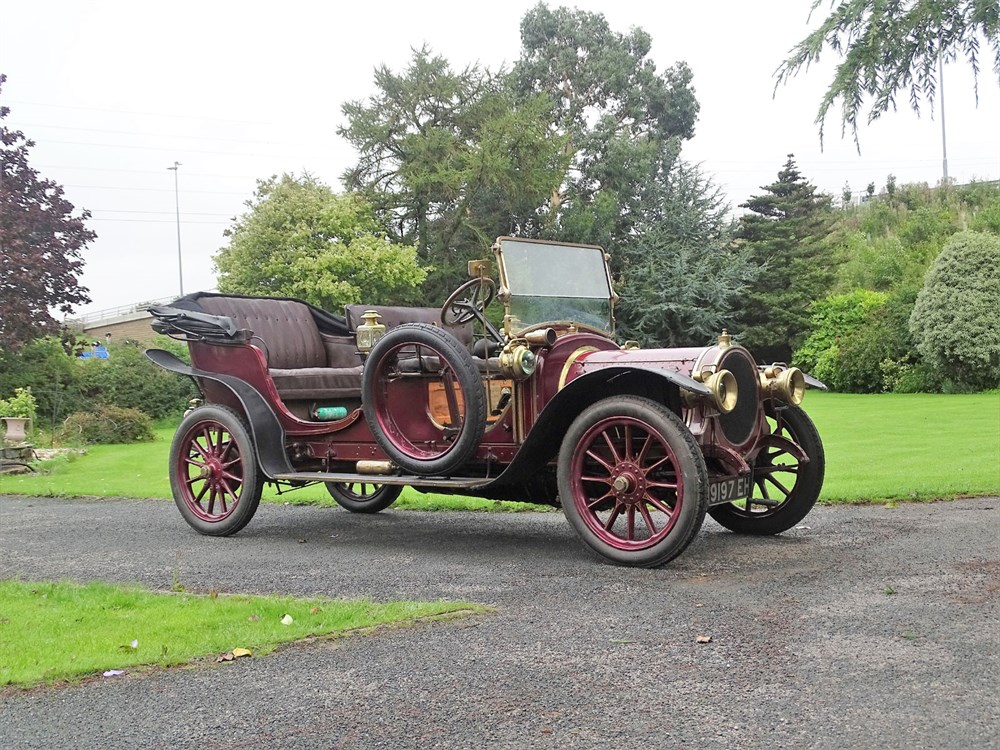 `Up to 1914 the Delaunay-Belleville was regarded by many as the best car in the world, and was favoured by buyers who valued quiet, unostentatious dignity' (The Complete Encyclopaedia of Motorcars, G.N. Georgano)

`The one continuing problem in my life has always had the shape of just one question: what amusing thing can I do next?' (Evalyn Walsh McLean)

Having patented a pressurised oil lubrication system for steam engines (of up to 7,000hp) in 1897 and made boilers for the world's most technologically advanced battleships, the St. Denis-based firm of Delaunay-Belleville launched its first motorcar at the December 1904 Paris Salon. Designed by engineer-cum-racing driver Marius Barbarou whose CV had already encompassed stints at Clement and Benz and who would later mastermind Lorraine-Dietrich's consecutive Le Mans 24-hour victories (1925,1926), the advanced newcomer featured a distinctive circular honeycomb radiator (as a nod to the marque's boiler making prowess), crankshaft-driven oil pump, and `hermetically sealed' undershields for the engine and gearbox.

The first French manufacturer to produce six-cylinder engines, Delaunay-Belleville found favour with the world's elite including President Poincare of France, the King of Greece, King Alfonso XIII of Spain, the Maharaja of Cooch Behar and, most famously, Tsar Nicholas II of Russia. The latter is rumoured to have taken delivery of twenty cars and even had a model named after him; the 70hp SMT (Sa Majeste le Tsar). It was not unknown in period for a Delaunay-Belleville six-cylinder engine to cover as much as 200,000 miles between overhauls.

Introduced in 1908, the Type I was based around a channel section, ladder frame chassis that tapered towards the front so as to facilitate a smaller turning circle. Equipped with transmission and rear wheel brakes, it also featured all-round semi-elliptic leaf-sprung suspension (plus a `helper' transverse leaf at the rear). Powered by a 2.6 litre straight-six engine allied to manual transmission, the Type I evolved through IA and IB guises switching from monobloc to bi-bloc cylinder construction and gaining a capacity increase to 2.9 litres along the way. Bodied by the likes of D'Ieteren, Million-Guiet, Vanden Plas, H.J. Mulliner, Vanden Plas, Brewster and Rothschild, total Type I production amounted to just 185 chassis.

Wealthier than many a king or head of state, the first owner of chassis 4767 was Evalyn Walsh McLean. An American mining heiress and socialite who famously became the last private individual to acquire the 45-carat Hope Diamond when she bought it from Pierre Cartier on January 28th 1911, her extravagance knew no bounds. Reputed to have the highest private electricity bill in Washington DC, McLean held weekly dinner parties for the capital's political and diplomatic elite and delighted in seating ideological or personal enemies next to each other. At one of her lavish soirees, a senator surveying the ballroom was heard to remark: `This sort of thing is what brings on a revolution'.

Moving to Paris at the age of eighteen in 1904, she incurred the wrath of her father's bankers by using a letter of credit they extended her to buy a brand-new sports car rather than settle her music tuition fees. Returning to Europe as a newlywed four years later, Evalyn and her husband spent over $5,000,000 in today's money on their honeymoon! No stranger to controversy, the couple travelled to Moscow shortly after the Russian Revolution with their trip being immortalised in the Cole Porter song Anything Goes: "When Mrs Ned McLean (God bless her) / Can get Russian reds to "yes" her, / Then I suppose / Anything goes".

Built on 23rd May 1912, chassis 4767 was bodied by Brewster of New York as a Park Phaeton. An elegant and well-proportioned design with swooping wings and numerous horse-drawn carriage inspired details, it must have cut quite a dash on the streets of Washington DC. Sparingly used by the McLeans, the Delaunay-Belleville reportedly showed just 1,100 miles to its odometer when Charles W. Bishop of New Haven, Connecticut spotted it on a dealer's lot in the American capital during 1938. Recollecting his purchase in The Antique Automobile magazine a dozen years later, Mr Bishop recalled how: `The strange round hood, and the graceful sweep of the Victoria body with its bay-buggy top enchanted me so that I scarcely noted the four dried-out tires on which it had been carelessly dragged from its sanctuary. Neither did the dried-out leather fenders and the checked paint deter me. Gasoline was poured into the tank and after a few turns, the motor began to tick over contentedly'.

Disassembling the engine for the first time after completing the 1950 Glidden Tour, he was impressed to find the water manifold directed coolant to the valve seats and that the vaned flywheel drew hot air out of the engine bay etc. Treated to a repaint, renewed roof / wing coverings and sundry upholstery repairs during Mr Bishop's tenure, the Type IA also contested the 1954 Glidden Tour. Purchased by the vendor from William Loughran thirty-seven years ago, chassis 4767 remains remarkably original. Rallied extensively during the current ownership including a 460-mile trip just last year, the Park Phaeton still retains its original numbered floorboards and factory-fitted undershields. The original tool tray and tools nestle beneath the driver's seat and the fuel and water caps are engraved with `Delaunay Belleville, St Denis, Seine'. A Brewster & Co branded Warner Auto-Meter (speedometer) graces the dashboard, while other fittings include: Ducellier carriage lamps, SylverLyte head / sidelamps and a Desmo bulb horn.

Boasting an electric starter, the original engine burst into life upon inspection and ran evenly. The radiator has been recored in the last few years and the car is said to be amazingly tolerant of modern `stop start' traffic. The rear axle still sports a 107-year old leather gaiter and overall the Park Phaeton exudes a wonderful patina that only adds to its air of originality. Issued with Certificate of Date No. 1613 by the Veteran Car Club of Great Britain on 14th March 1984, this highly usable and imposing Edwardian motorcar rewards close inspection.