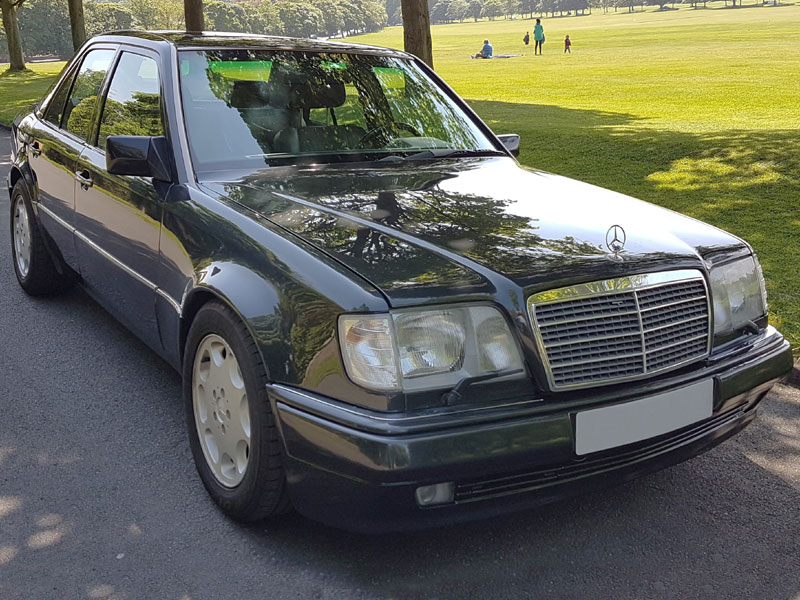 - A very smart example with approximately 105,000 miles from new

- Engine overhaul in 2008 and stainless-steel exhaust system in 2009

The 500 E was regarded as a classic from birth. With its discretely macho looks, limited production run (just 10,479 examples in little over five years) and BMW M5-matching performance, it was always destined to be popular with aficionados of the marque. Based on Mercedes's proven W124 Saloon, each example was hand-built by Porsche, powered by the lusty 5.0-litre, quoted 322bhp, V8 engine and available only as a four-seater with automatic transmission the 500 E was distinguished from the standard E class by subtly flared wheel arches. All were lefthand drive.

'J49 JGU' is an early, more powerful, example first registered in Germany. In recent years it was sold by The Hairpin Company to the Dealer Principal of Porsche Silverstone, from whom the vendor acquired it in 2010. Finished in Blue Black and trimmed in contrasting Grey hide, it has covered approximately 105,000 miles from new. The extensive specification incudes recently re-gassed air conditioning, sunroof, electric memory seats, bluetooth phone connectivity and a discreet i-pod connection in the central arm rest. Having benefited from an engine overhaul in 2008 and stainless-steel exhaust system in 2009 this high performance Mercedes is shod with matching Dunlop tyres. Offered with a large file of invoices and details on the recent regular servicing schedule the vendor has used the Mercedes for trips to France and this year to visit Techno Essen in Germany with no problems. Described as being in 'Very Good' condition with regards to its engine, automatic transmission, bodywork, paintwork plus interior trim, is said to 'run beautifully', and is offered with an MOT certificate into May 2018.