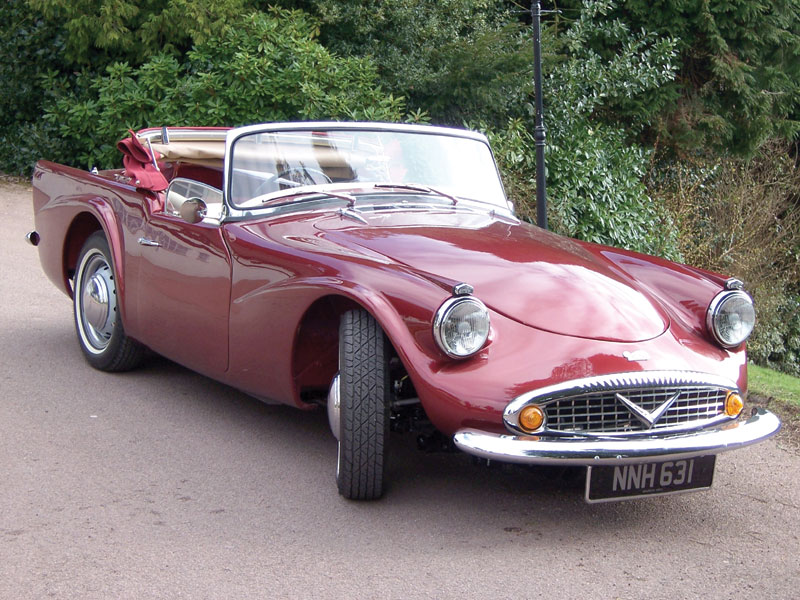 Launched at the 1959 New York Motor Show, the Daimler Dart sportscar was hurriedly rechristened the SP250 following threats of legal action from Chrysler's Dodge division which already used the moniker. The striking-looking newcomer was clothed in a tough fibreglass body and built around a traditional cruciform-braced ladder-frame chassis. By 1960, Daimler was in Jaguar's hands and the so-called B specification SP250s featured a much stiffer frame, equipped with additional outriggers and a strengthening hoop between the B posts. The jewel in the car's crown was its engine, a silky smooth 2.5-litre V8 unit designed by Edward Turner. Suspension was independent with wishbones and coil springs at the front and a live axle hung on leaf springs at the rear. Braking was by hydraulically-operated discs all-round. Credited by the 'Motor' magazine with a top speed of 123.7mph, the SP250 was only in production until 1964 by which time a mere 2,500 had been made.

The B specification SP250 in this sale is finished in Metallic Burgundy teamed with a Cream leather interior and Burgundy carpets, double duck hood and tonneau. The first owner reportedly purchased it during March 1961 as a birthday present for his wife, and it remained in the same custodianship until sold in 1990, in need of restoration. The vendor acquired the still untouched Daimler during September 2008 and embarked on a two and a half year, 'no expense spared' (£25,000) ground-up restoration. The highly detailed work included: new outer chassis rails and rear uprights; the body media/soda blasted and resprayed; new Canadian maple fascia by Chapman & Cliff; complete retrim and new hood and tonneau; thorough overhaul of engine, axle and gearbox; the replating of major chromed parts; new tyres and wiring loom. This beautifully-presented Daimler comes with a 100-photo album of the work and receipts for the parts purchased. Sadly, having completed the restoration, the vendor found he was too tall to drive 'NNH 631' (the original registration) in comfort. It's now available for somebody else to enjoy.
Share: