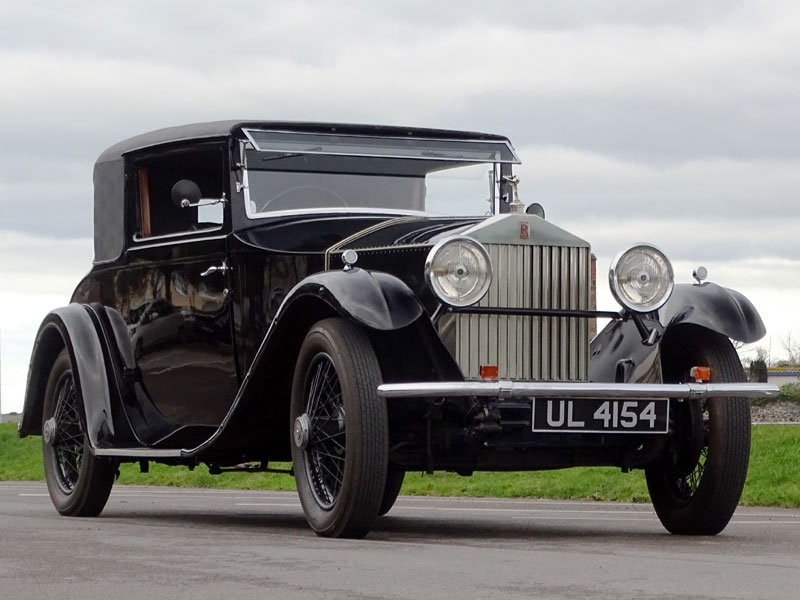 - Part of the vendor's private museum collection since March 2015 and since treated to a full rewire, repaint, new headlining, fresh carpets, stainless steel exhaust, much rechroming and new tyres etc

- Original buff logbook and factory-fitted engine, will reportedly cruise at 55mph thanks to Ristes-supplied overdrive

Intended to broaden the marque's reach beyond the fabulously rich to the merely very wealthy, the Rolls-Royce 20hp was introduced in 1922. A more radical design than its illustrious 40/50hp Silver Ghost sibling, the newcomer was based around a 10ft 9in wheelbase ladder-frame chassis equipped with all-round semi-elliptic leaf-sprung suspension, rear-wheel brakes and fully floating 'Hotchkiss Drive' back axle. The first Rolls-Royce engine to feature overhead valvegear, its 3127cc straight-six was designed to run at anywhere between 150rpm and 3,500rpm. Priced at £1,100 in bare chassis guise, the 20HP was not only less expensive than the Silver Ghost but also lighter and more responsive to drive too. Progressively updated with a four-speed manual gearbox and all-wheel braking, the 'baby' Rolls remained in production until 1929 by which time some 2,940 are thought to have been made.

According to its accompanying RREC copy build records, this particular example - chassis GFN10 - was ordered new from Jack Barclay Ltd by Arthur Donn Esq. of Regent's Park, NW8. Entrusted to coachbuilder Victor Broom Ltd of Camden Town, it was initially bodied as a four-door saloon before being granted the number plate `UL 4154' on 24th January 1929. A property developer with interests in Eastbourne as well as London, Mr Donn is understood to have commissioned Barker to fit the present Coupe coachwork during 1931. The RREC copy build records mention an accident that same year and also note revised carriage spring rates, while the Rolls-Royce's original buff registration logbook lists a change to `Type of Body Coupe' which is ratified by a London County Council stamp (dated December 1931). The same document shows that Mr & Mrs Donn kept the 20hp until 1936. Thereafter, it belonged to Arthur Phillips of Broadwater Court (who made his money from khaki dye), John Compton of Crystal Palace, Rawlence Cars Ltd of Albermarle St and The Honourable W.R. McLintock Bunbury of the 15/19 Hussars stationed in York. The later became the Fourth Baron Rathdonnell during the late 1930s and relocated `UL 4154' to Lisvanagh, County Carlow, Ireland where it was licenced up until his death in 1959. An email on file from the present Baron Rathdonnell states that he learned to drive in the four-seater and that the family sold it in about 1960 (he also supplied a delightful black and white photo of the car depicting a family picnic not to mention its distinctive windscreen visor and tubular bumpers). Known to have migrated to Canada by 1964, chassis GFN10 was resident in Woodbridge, Ontario for many years. Repatriated by renowned marque specialists The Real Car Company during 2013, the Rolls-Royce was described as `running well and offered recommissioned and newly MOT tested . . . a good looking car, in sound condition, scruffy in some respects, but appealingly so' when they sold it to Alan Sinclair the following January. Forming part of the vendor's private museum collection since March 2015, the past three years have seen the 20hp treated to a full rewire (incorporating new flashers with audible warning), replacement running boards / door locks, repainted bodywork and much rechroming. The carburettor was overhauled by Ristes Motors, the same firm supplying the overdrive which was fitted in 2016 and allows for a 55mph cruising speed. A stainless steel exhaust has been added and the starter motor refurbished. The front and rear springs have been greased and shod with fresh gaiters. The water pump has been repacked with special grease and all the grease / oil nipples attended to. The wiper motors / arms / blades have been renewed as have the battery box, headlining, carpets, number plates and tyres (Lester). The engine and gearbox were drained of oil and refilled as part of a thorough service during September 2016. The back axle was topped up too. Starting readily on inspection, `UL 4154' performed well en route to the photography location. Offered for sale with V5C Registration Document, original buff logbook, instruction book, RREC copy build records and history file.
Share this page: