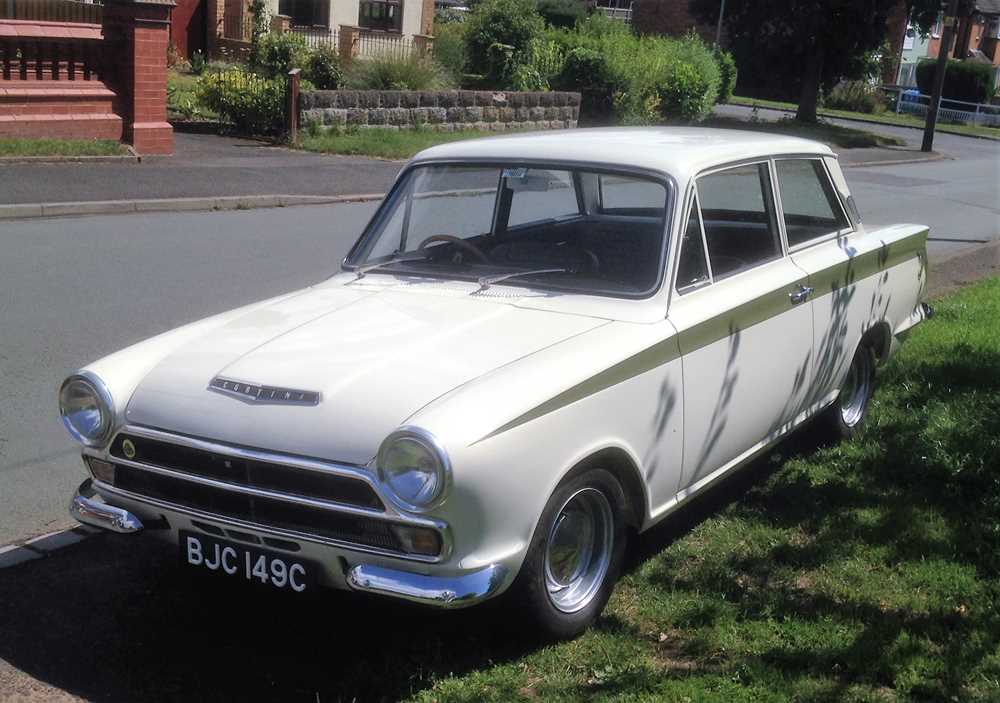 "I purchased this matching numbers car some ten years ago after months of searching for a genuine Lotus Cortina with correct original chassis plate and Lotus build plate both of which are on ‘BJC 149C’. The car has received a full bare shell, ‘nut and bolt’ restoration to at least A1+ standard and with minimum effort could be classified as concours. Original Ford wings were fitted and wherever possible genuine Ford repair panels were utilised during the refurbishment. The shell was professionally painted with low bake enamel and the underside treated with fine anti-chip body protection prior to being sprayed body colour.

The engine has been fully overhauled by Don Loughlin Engineering who built and maintained my Mini Cooper S and Lotus Twin-Cam engines over some twenty-five years of circuit racing. The original engine is fitted with C Type cams and cylinder head having been ordered to SE specification. Hence cam cover colour.

The gearbox fitted is the latest Lotus Elan specification with the improved larger blocker bars giving improved strength and enhanced synchromesh. The original gearbox is available and included in the sale.

The differential has been professionally reconditioned and the original Lotus machined driveshafts have been maintained. Wheels are freshly powder coated 5.5J x 13 shod with new Dunlop Aquajet 165HR x 13 tyres.

Research of the car’s history confirms its authenticity with original DVLA and local authority records obtained. It was first registered on 30th June 1965 to Jones Bros garage in Llanwryst, near Betws-y-coed. Attempts to contact the first owner were to no avail but a brief chat with the second owner who bought it in 1970 confirmed that it had rear leaf springs installed then. It is fitted with a well-known conversion kit from Ian Walker, a famous Lotus competition driver. It seems possible that the conversion was done by the first owner.

It therefore has not been possible to establish that the car left the factory with the notorious A-frame rear suspension or not! It does have all the original brackets and mounting points so fitment would be easy (available as a kit for circa £900). The tell-tale red painted ‘Lotus 3A’ marking exists on the rear parcel shelf under the trim.

The interior was fully retrimmed by Simon Aldridge of Wolverhampton with the exception of the original Lotus seats which are as purchased. They are the correct seats as used just prior to the fitting of the later GT type.

I have a box file of notes, receipts etc to go with the car which I purchased upon its return from Germany where it had lived for many years as a support road vehicle to a Lotus Cortina racing team. One photo shows it in paddock at Nurburgring with the racing vehicle.

All in all a rare original Lotus Cortina MKI, absolutely rust free and restored to a high standard which has yet to be run in!"

Mindful that the Harry Mundy and Keith Duckworth-developed Lotus Twin-Cam engine was based on his firm's 116E four-cylinder unit, Ford's boss of public relations Walter Hayes asked Colin Chapman to build 1,000 Lotus-powered Ford saloons for Group 2 homologation purposes. The savvy Hayes knew that winning on Sunday would sell cars on the Monday. The resultant Type 28 Lotus (or Cortina-Lotus in Ford speak) used a heavily revised suspension set-up, lightweight body panels and servo-assisted disc / drum brakes. Producing 105bhp and 108lbft, its 1558cc powerplant was allied to a close ratio four-speed manual gearbox and drove the rear wheels via an alloy-cased differential. Taking to the tracks in September 1963, its maiden outing at the Oulton Gold Cup was rewarded with third and fourth places behind two Ford 7-litre Galaxies. After the rear axle proved leak and failure-prone due to the loads put on it by the redesigned A-bracket / twin trailing arm rear suspension, the rear suspension was changed to leaf springs like Cortina GTs, the beginning of a progressive reworking in the interests of reliability and ease of maintenance that included a two-piece propshaft, steel panels, Airflow styling (complete with full-width grille), a stronger leaf-sprung rear axle and wider-spaced gear ratios. Highly sought after as a road car thanks to its class-leading performance and handling, the MkI Lotus-Cortina remained in production until 1966 by which time 3,301 are thought to have been made.