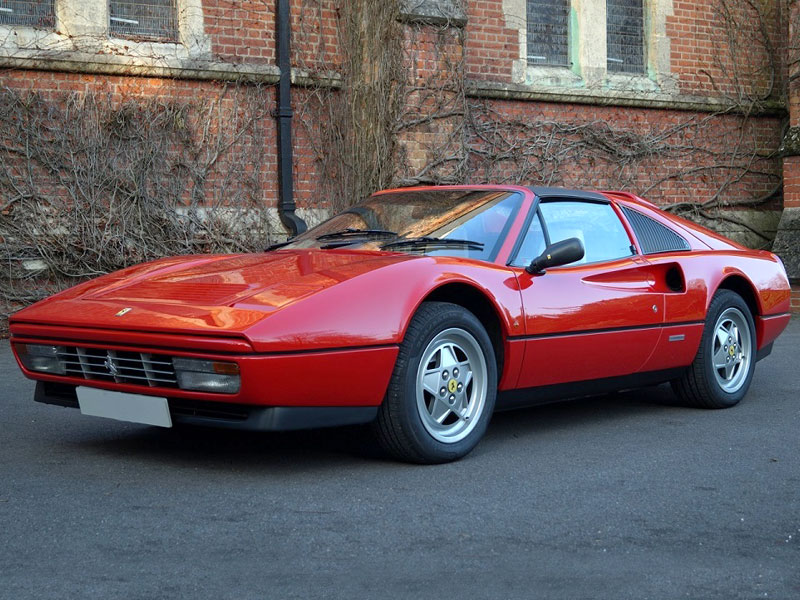 Styled by Pininfarina, the 328 retained the same iconic silhouette as its forebear but added a larger 'egg crate' grille, new bumpers and reworked bonnet and boot lids. Available in both GTB (berlinetta) and GTS (spider) guises, the Ferrari also benefited from a revamped interior - again inspired by the 288 GTO - complete with improved switchgear, redesigned centre console and more cosseting seats. Beloved by the press and public alike, the 328 remained in production until 1989 by which time just 542 examples are thought to have been despatched to the UK.

Delivered new on 1st August 1989 to a Roger Shrubb of Chorleywood via Lancasters of Colchester, this beautiful example was initially serviced by Strattons of Wilmslow before passing to its second keeper, Nicholas Goulandris of St John's Wood, London, on 22nd November 1990. By May 1995, with 16,608 miles recorded, it was being cared for by DK Engineering who also carried out a modification to the fuel injection system. DK continued to look after the car up to around 1997/8 following which servicing was entrusted to Moto Technique Ltd. Between 2000 and 2005 servicing was being done by Motorvation of Sarratt, Herts, before the car left the UK for a spell in Greece where maintenance and servicing was completed by official dealer Genesis SA of Athens.

From the notes in the accompanying history file it came back to the UK in 2010, returning to Motorvation for servicing before passing to its third owner, Michael Docker of Loughton, Essex. In January 2012, a service at 32,137 miles was carried out by Maranello of Egham following which Graypaul completed another at 32,336 miles in May 2013 which included a complete application of Tuff-Kote Dinol retreatment to the underside. In August 2014, further servicing was carried out by Maranello of Egham at 32,491 miles before the car was offered for sale via Foskers with 32,606 miles on its odometer.

Since acquisition by the vendor this cossetted example has continued to be used sparingly and still registers less than 32,900 miles. Included in the comprehensive history file are the wallet containing warranty card, service book and handbook, DVLA record print outs, numerous invoices from Foskers, Maranello, Graypaul, DK Engineering, Moto Technique, Motorvation and Genesis together with assorted expired MoT certificates back to 1997. The cambelts were last replaced by Foskers in January 2016 (less than 200 miles ago) and we understand the car will benefit from a checkover and an oil and cambelt service prior to the sale. Offered with Swansea V5C and MoT to May 2018, the vendor rates the bodywork, paintwork, engine, gearbox and electrics as all being in "excellent" condition. All in all, an extremely well-cared for righthand drive 328 that is worthy of close inspection.
Share this page: