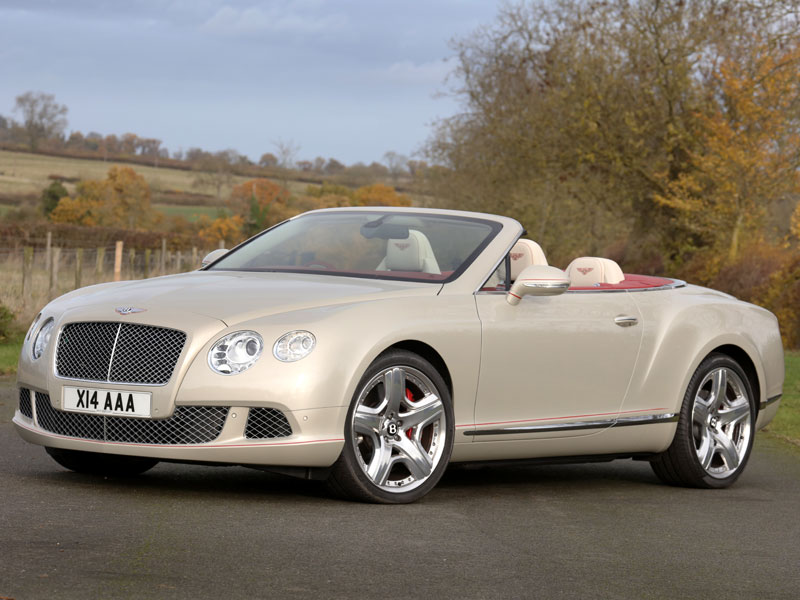 'In fact, driving the car will make anyone feel just a bit more sophisticated. Inside the luxurious cabin furnished with highest quality soft-touch leather, cool-touch metals and deep pile carpets, plus intricate wood veneers that surround and accent the dash and the doors, you feel like you're royalty on wheels. With the sun shining, the soft-top down and the wind flowing freely around the cabin, it's hard to beat this driving experience . . . While the Bentley Continental GTC screams opulence, car enthusiasts will still appreciate its sporting side. After all, Bentley has always been known as a driver's car. Thanks to 40/60 rear biased all-wheel drive, front double wishbone and rear multilink suspension acting all-around with Pirelli PZero 275/35 ZR-21 tires (20-in. standard), not only does the GTC turn into curves with composure, it is also ready to accelerate out with immediacy via a quickshift ZF 6-speed automatic transmission' (Road and Track magazine's Patrick Hong writing about the second generation GTC in October 2011).

Introduced at the New York Motor Show in April 2006, the Bentley Continental GT Convertible (or GTC) proved an immediate sales success. Determined to engineer the most torsionally rigid open four-seater that money could buy, the Crewe manufacturer (a) incorporated additional steel tubing within the newcomer's A-posts and windscreen frame, (b) reinforcing its sills and (c) cross braced the floorplan to a greater degree. The result was a class leading 16,595ft-lb per degree. A very near match in dynamic terms for its Coupe sibling, the Convertible utilised the same crushingly powerful twin-turbocharged 6-litre W12 engine, Torsen-based permanent four-wheel drive system, massive ABS-backed disc brakes and sophisticated all-round independent air suspension. Electro-hydraulically operated, the Bentley's luxuriously padded fabric roof not only stowed away neatly but also provided almost limousine levels of refinement. Reputedly capable of over 190mph when topless, the GTC featured two sturdy steel hoops concealed beneath its rear headrests which could be deployed within fractions of a second if the onboard computer sensed an impending roll. Arguably more of a 2+2-seater than a true four-seater, the model could raise or lower its hood at speeds of up to 20mph (a nice party piece in slow moving traffic). Unveiled at the 2011 Frankfurt Motor Show, the second generation GTC could be had in W12 or V8 powered guises. The former was reworked to develop a quoted 567bhp and 516lbft of torque, outputs sufficient for a claimed 0-60mph time of 4.4 seconds and a 195mph top speed. As well as various mechanical refinements, the second generation cars also benefited from a mild facelift which only served to make Dirk Van Braekel's styling look even more muscular yet elegant.