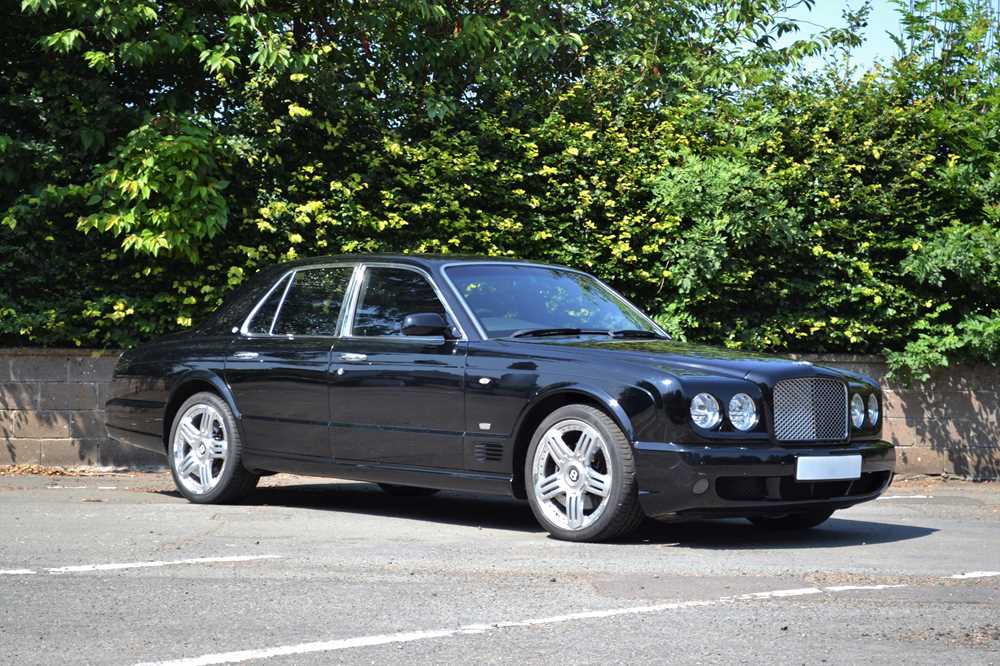 At launch, the Arnage T Mulliner Level II was not only the highest specification motorcar available from Bentley, it was the most powerful model the company had ever produced and the fastest production specification four-door Saloon available anywhere in the world. Its most sumptuous of specifications included: quilted leather interior trim with crested backrests; engine-turned aluminium facia and door trims; heated and electrically-adjustable rear seats; rear picnic tables; DVD-based satellite navigation system; cruise control; CD autochanger; twin Bentley umbrellas; five-spoke split-rim alloy wheels; Mulliner badges and lower vents for the front wings; Mulliner tread plates; quad exhaust pipes etc. The power output of the twin turbo light-alloy 6.75-litre engine was no less than 456bhp, while maximum torque was a stump pulling 645 lb ft - this wasn't just a hyper-luxury Saloon, but a supercar in disguise, capable of sprinting to 60mph in a little over five seconds and on to a top speed only a couple of miles-per hour shy of 170mph.

This Arnage T Mulliner was manufactured in 2005 and was supplied new in right-hand-drive to the United Kingdom. Fitted with the 6750cc twin-turbo V8 engine with a five-speed automatic transmission, the Bentley is finished in Black with full Beluga Black quilted hide throughout with diamond stitching, turned aluminium dash, Dark Walnut trim and embossed front and rear seats. The Arnage has covered just 50,971 miles from new (at time of consignment) and has had only five owners from new. Understood to have been retained by Bentley Motors as a press car (which the service history supports), the Bentley entered current family ownership in 2008 and has been with the vendor since 2013.

Offered with the stamped service book which illustrates two stamps from the Bentley Motor Cars Press & Special Car Support centre and a further seven service entries from other Bentley main dealers, most recently by Bentley Glasgow at 48,271 miles, when the Bentley was also provided with new spheres. The desirable post-facelift, quad-headlight version of the Arnage 'T' in Mulliner Level II specifaction is further accompanied by the original owner's handbook, two keys and a current V5C.

PLEASE NOTE: The registration number displayed in the video below is not included in the sale.