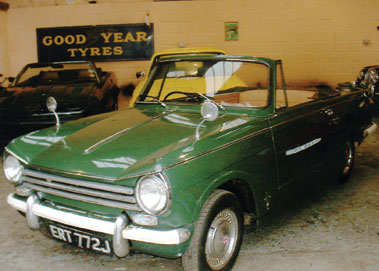 By the late 1950s, the British Motor Industry map was dominated by BMC, Ford and Vauxhall. Not content to spar with each other, the trio's appetite for sub-contractors was undermining their smaller-scale opposition. Thus, when Standard-Triumph began work on a replacement for the 'Eight' in 1957 its inability to produce monocoque bodyshells in-house (or find a cost-effective supplier) saw it revert to a separate chassis design. Luckily, the company was able to capitalise on this situation by devising a highly versatile platform (that would go on to underpin the Spitfire, GT6 and Vitesse). The first model to use it, the Herald, was launched in April 1959. Blessed with elegant lines, courtesy of Giovanni Michelotti, it featured all-round independent suspension and rack-and-pinion steering. An accomplished town car criticism as to its lack of pace was answered by the introduction of the '13/60' during 1967. Powered by a 1296cc four-cylinder OHV engine that developed 61bhp and 73lbft, it was capable of some 85mph. Visually distinguished by a new grille, the '13/60' also boasted front disc brakes and could be had in saloon, estate or convertible guises. Remaining in production until 1971, it accounted for 82,650 sales (though, the vast majority were saloons).

This 1970-manufactured 13/60 features the improved torque characteristics associated with the largest Herald motor. The vendor informs us that he will supply the car with a fresh MOT certificate, and the build-date makes it eligible for historic class (free) road tax. A "quality" hood was recently fitted, the coachwork is described as "sound" with a "tidy" interior and the car is noted to "drive well". Dull paintwork may respond to elbow grease, but the car is presented honestly as it stands. The active Triumph clubs for which this car qualifies also provide a wealth of events to take part in, from local shows to the famed Club Triumph Round Britain Reliability Run from John O'Groats to Lands End. Any Herald convertible is an ideal car for full-time summer use, being frugal on fuel, characterful to drive and featuring that demon-turning circle which allows parking in the tightest of city spots.
Share: