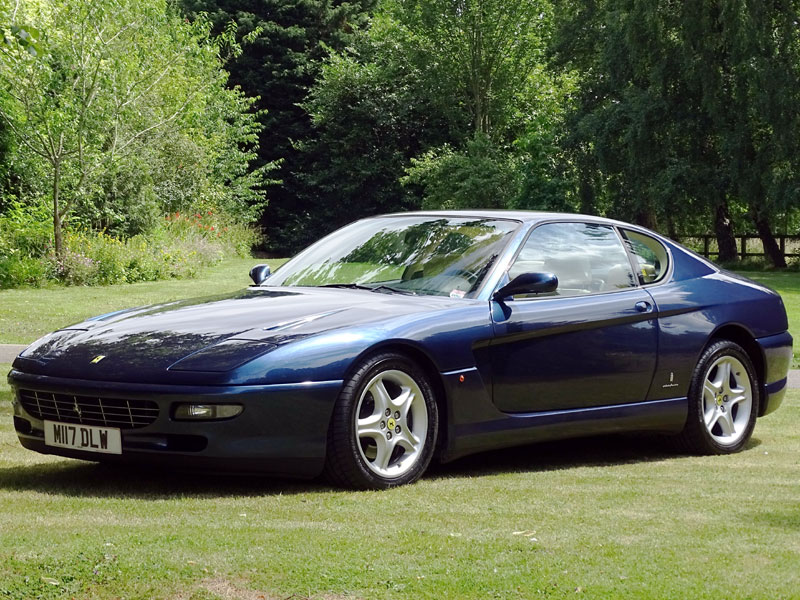 - Supplied new in the UK to European lefthand drive specification by HR Owen at a cost of £153,000

At the time of its introduction in 1992, the 456 GT was Ferrari's most powerful road car to date (with the exception of the Race-bred F40). It was a replacement for the 412 and, in common with that model, was powered by a front-mounted V12 engine. However, rather than a 60deg unit as used previously, it was a 65deg one developed from the Dino V6. The output was 436bhp - sufficient to vault the 1690kg Prancing Horse to 62mph in around 5.2 seconds and on to a terminal speed of 188mph; making it the fastest four-seater production car of the time. The chassis was of tubular spaceframe construction, to which were added alloy body panels and a one-piece composite bonnet. Production of the various versions ran from 1992 to 2003, during which time 3,289 examples were made, of which 1,548 were manual GTs.

`M117 DLW' is a lefthand drive 1995 GT finished in the pleasing combination of Swatters Blue and Crème hide interior trim. It was supplied new in the UK to European lefthand drive specification by HR Owen at a cost of £153,000 with the original invoice included in the sale. There have been three keepers to date, the first of whom retained the Ferrari from 1995 to 2000, the second from 2000 to 2005, and the third for the 12 years until now. In recent times it has been regularly maintained by aircraft mechanic Andrew Harmer of Brooke Garage, Norwich, and in addition to routine maintenance has benefited from a new: master cylinder in 2010; clutch in 2011; cooling fan in 2012; drive and auxiliary belts in 2013; and new front tyres and oil service in May of this year. This lovely long term ownership, 61,000 mile classic Ferrari is now offered complete with Parrots hands-free phone kit / bluetooth music, integrated Tom Tom SAT/NAV, transferable life contract Trackstar tracker, original factory wallet with service and handbooks, full factory tool kit, tyre foam canister and a lovely history folder containing the original sales brochure, large collection of old invoices, tax discs and MOTs, including one valid into May 2018.