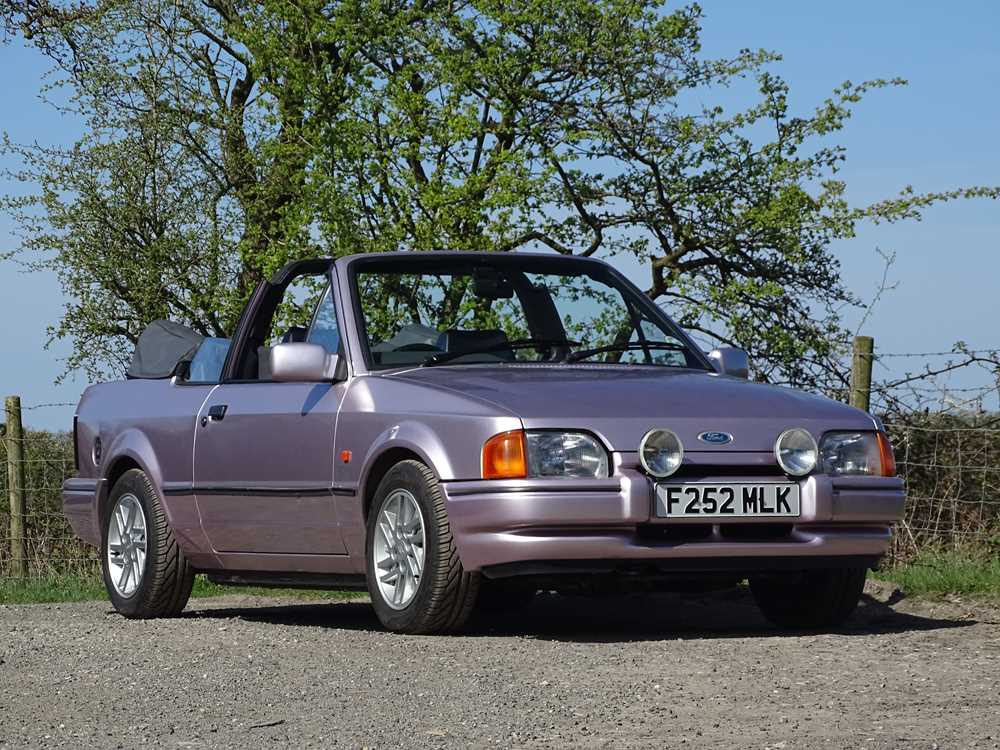 This charming XR3 was supplied by Godfrey Davis Ford, Paddington and pleasingly still carries its rear window dealer sticker . It is one of reputedly 1200 special editions produced in 1989 in the 3 colours of Amethyst, Aquafoam and Aquarius blue and had its own sales brochure printed . Quite evidently a well looked after vehicle that has a current MOT test which is ideal for top down summer motoring and reliving the 1980s.

Launched alongside the rest of the Escort MKIII range in September 1980, the XR3 was an instant success (accounting for a reported 11,000 sales during the following year). Intended as a rival to the Volkswagen Golf GTi, its monocoque bodyshell (complete with 'aerodeck' hatchback) boasted all round independent suspension (Macpherson strut front / trailing-arm rear) and disc / drum brakes. Powered by a 1597cc OHC four-cylinder engine mated to four-speed manual transmission (five-speed from February 1982 onwards), it proved quick but unruly. Conscious that the planned introduction of fuel injection would bring yet more speed, Ford charged its SVE (Special Vehicle Engineering) department with taming the hot hatch's wayward handling. Begun in October 1981 and overseen by Ron Mansfield, the XR3i project bore fruit in just fifteen months. Unveiled in January 1983, the revised model featured - as its name implied - Bosch K-Jetronic fuel injection. Credited with developing 105bhp and 101lbft of torque, the Fast Ford was reputedly capable of 120mph and 0-60mph in 8.5 seconds. Built in Saarlouis (Germany), it boasted a more comfortable ride as well as better road manners courtesy of its lowered / recalibrated suspension. Distinguished like its forebear by 'cloverleaf' alloys and a prominent tailgate lip spoiler, the XR3i captured the imagination of a generation. A cult car among 'boy racers' of all ages, it is still prized to this day.