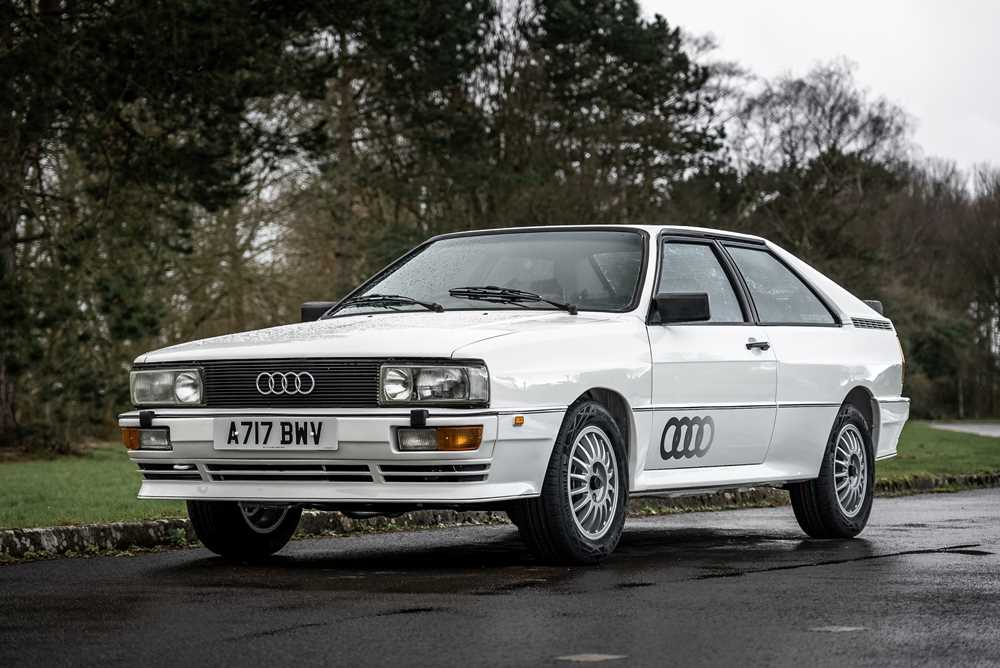 Audi’s Quattro is a legend that re-wrote the form book of international rallying, as well as causing rival manufacturers to rethink their offerings to members of the public desiring road cars of above average traction. It was, quite literally, a trailblazer. The story began with Audi chassis engineer Jörg Bensinger, who spent a Finnish winter testing the Volkswagen Iltis – a four-wheel drive West German military and forest service vehicle – and found it could outperform all other machines on snow, whatever their type or power output. He put the idea of a four-wheel drive version of the Audi 80 Coupe to the company’s hierarchy and, well, you know the rest.

The resulting model was launched to great excitement at the 1980 Geneva Salon and then released to European customers later the same year. It was initially powered a 2144cc in-line, five-cylinder, 10-valve SOHC unit with a turbocharger and intercooler. This was the first time the mass car market had been introduced to the intoxicating combination of turbo power and four-wheel drive, and the results were electric. Motor magazine rocketed their test car to 30mph in a dismissive 1.8 seconds and to 60mph in 6.5 seconds, causing them to comment ‘…such acceleration can hardly be bettered by any other four-seater in current production’, and that was irrespective of engine size. With such a devastating weapon at its disposal, Audi wasted no time in taking on the rallying establishment. The results came thick and fast, with victory for versions of the model in the 1982 and 1984 Manufacturers’ Championship and in the Drivers’ one for Hannu Mikkola in 1983 and Stig Blomqvist in 1984. It was also in a Quattro that the female French ace Michelle Mouton became the first woman ever to win a World Championship rally, and was very unlucky not to enjoy outright victory in the 1982 Championship.

During its production cycle, what enthusiasts now refer to as the ‘Ur’ (original) Quattro enjoyed two engine upgrades and continuous development, but the basic concept never changed and even the outward appearance altered very little. Boasting its own dedicated assembly line and crew, some 11,452 examples are understood to have been completed between 1980 and 1991. Enthusiasts will never totally agree on a list of cars that changed the world, but few would deny Audi’s ‘Ur’ Quattro a place.

Owned since 1985 by the vendor’s brother in law then purchased by the vendor in 1999, 'A717 BWV' covered just 94,000 miles before being taken off the road in 2005 and dry stored. During 2020/2021 the vehicle has undergone a professional, extensive but sympathetic restoration by Allard Sports Cars. The engine has been fully rebuilt with new cylinder liners, piston rings, main and big-end bearings, new oil pump, water pump, all new gaskets and belts. The cylinder head has been refaced, the valves lapped in and the camshaft followers re-shimmed. The transmission has been reconditioned also.

The entire bodyshell has been stripped, repaired, paint prepared and repainted in the original Alpine White, including bringing the engine bay and underbody area up to almost as new condition. All vehicle components have been reconditioned, tested and refitted. The suspension has been overhauled and reinstalled with new bushes. All brakes checked and reconditioned where required including new brake pads. The wheels have been reconditioned and shod with 4 new tyres. The vehicle has also had all new fuel and brake lines and a new battery. Very rarely does the opportunity arise to purchase a much sort after Audi Quattro, which has had such an extensive restoration, with all the detailed work and expense already dealt with. This legendary 80's Icon presents extremely well.