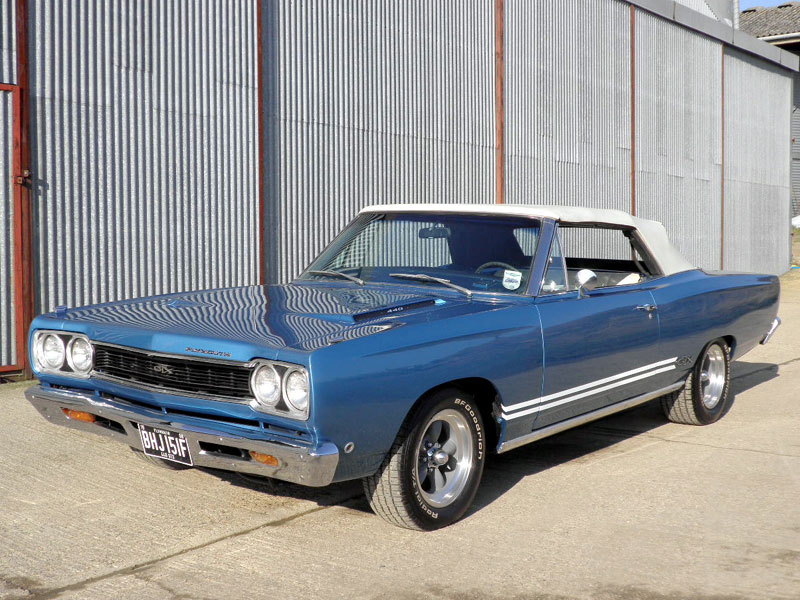 Originally dubbed the Belvedere GTX, Plymouth's new gentleman's Muscle Car was unveiled in 1967. It was readily distinguished from the cooking Belvedere by its special grille and rear panel, as well as mock bonnet scoops, chrome race-style fuel filler cap and optional racing stripes. Heavy duty suspension was standard, as was the company's 440ci (7.2-litre) V8. With 375bhp on tap, the GTX 440 could sprint to 60mph in around 6.5 seconds and cover the standing quarter mile in 15.2 seconds with a terminal speed of 97mph. And, if that wasn't quick enough, then there was the option of the smaller but even more powerful Chrysler 426ci Hemi engine. The GTX was given a makeover just one year into production and the somewhat boxy '67 body replaced with a more curvaceous one. It was offered in two styles - two-door Hardtop and two-door Convertible.

The left-hand drive GTX 440 being sold is one of the latter, of which only 881 are said to have been produced in 1968. It sports a QQI Bright Blue Metallic body teamed with a White interior and matching power hood. 'BHJ 151F' has recently benefited from a £25,000 restoration that included: a bare metal respray; fully detailed engine bay; overhauled 440ci engine (Houser Racing); new front disc brake conversion with new master cylinder and servo; new Torque Thrust 'D' American racing magnesium wheels shod with BFGoodrich raised white letter tyres; new twin custom-built stainless steel exhaust system; fully detailed underbody. The vendor currently considers this stunning looking and apparently very original, 'matching numbers' 440 GTX Convertible to have "super" bodywork, paintwork, interior trim, engine and three-speed automatic transmission. It is being sold complete with current tax and MOT. A rare and serious muscle car with huge presence, in every sense of the word.

PLEASE NOTE: This vehicle has an MOT until June 2013.
Share: