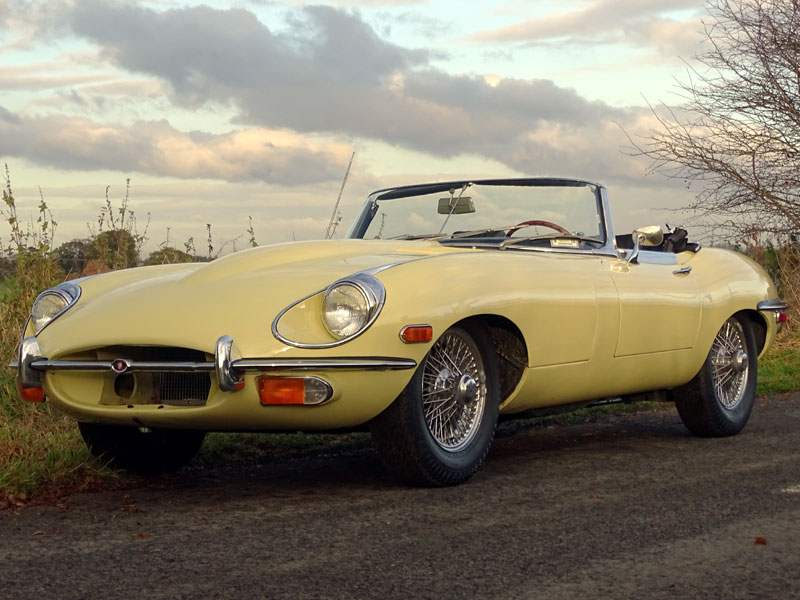 Introduced in 1968, the Jaguar E-Type Series II cars sported revised bumper and light arrangements. Less noticeable was the increased size of the front air intake that in conjunction with dual cooling fans made the newcomer better behaved in hot weather and heavy traffic. With its 4235cc engine developing a quoted 265bhp and 283lbft of torque, the Series II was reputedly capable of nearly 150mph and 0-60mph in 7.5 seconds.

According to its accompanying Heritage Certificate, this left hand drive example was originally finished in Primrose Yellow with Black interior - the colour scheme it pleasingly wears today. Manufactured on 22nd August 1968, it was dispatched to Herrington Motors of New York and purchased by its first and only private keeper, a Sarah J Hammer who retained the Jaguar until 2014. Dry stored for twenty-nine years, an illness prompted Ms Hammer to take the car off the road in 1985 at which time it had covered just 45,000 miles (as confirmed by a letter on file).

Subject to a mechanical overhaul by Klaus Motors LLC of New York in 2014, the Jaguar was shipped to the UK thereafter and has since been treated to a new hood / carpets, repaint in Primrose Yellow, stainless steel exhaust, full service, fresh brake servo, replacement brake and clutch master cylinders and five new period-style Dunlop tyres. A matching chassis and engine numbers example, the Jaguar is accompanied by the aforementioned Heritage Certificate, collection of invoices, handbook and original wallet with service book, Nova document confirming all taxes paid and a current MOT with 'no advisories' expiring 10th April 2017. Presenting very nicely, this highly original and unusually low mileage Series II Roadster is awaiting a second keeper to register it in their name. A rare opportunity.

PLEASE NOTE: The interior on this lot is Black and the year of manufacture is 1968