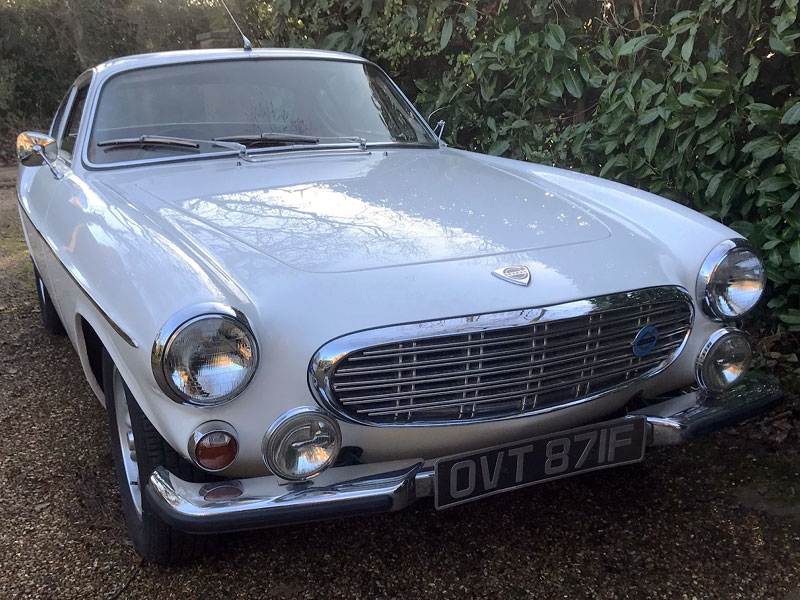 - Much restoration work in 2016 including sills, floor and outriggers

Based on a design exercise by the Swedish-born Pelle Petterson whilst working at Frua, the Volvo P1800 sports car was officially unveiled at the January 1960 Brussels Salon. Not entering production for a year, the newcomer's sleek two-door monocoque bodyshell was equipped with independent front suspension, a coil-sprung 'live' rear axle and disc / drum brakes. Powered by a 1782cc OHV four-cylinder engine breathing through twin SU carburettors, allied to a four-speed manual gearbox, it was capable of over 100mph.

The P1800 was immortalised in the 1960s TV series 'The Saint' starring the late Roger Moore and this lovely righthand drive UK example bears a striking resemblance to the last car used on the show (NUV 647E), even down to the unusual driving lamps. During filming, Moore used a Pearl White example upholstered with red interior as his personal transport.

In 2016 the car was the subject of much restoration work including attention to the sills, chassis, floors and outriggers, followed by a glass-out repaint in white. Retaining its original red leather interior which is described as being in "good" condition, the odometer now displays some 92,600 miles. We are advised the bodywork, paintwork and panel gaps are all "excellent", whilst much of the chrome has been replaced. Both engine and transmission with overdrive are said to be "working well" and this stylish coupe rides on period style Minilite wheels. It is expected to possess a fresh MoT in time for the sale.