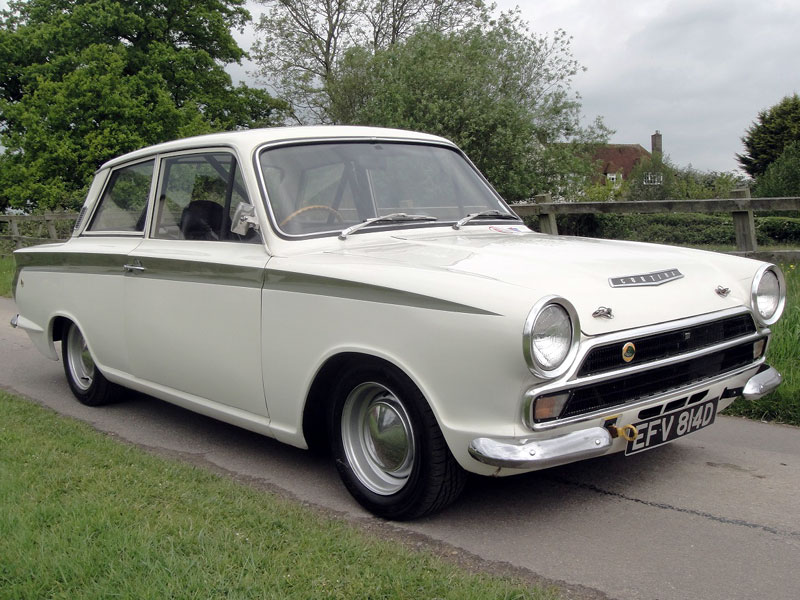 In 1963 Ford was looking to race the two-door MKI Cortina in Group 2, for which the obvious powerplant was the twin-cam version of the 'Kent' engine Colin Chapman had already developed for use in the Elan - the Lotus Cortina was born. In addition to the 105bhp 1558 cc engine, the changes included: a close-ratio gearbox, shorter front suspension struts, and trailing arms and coil springs with 'A' bracket at the rear. Wider 5.5J steel wheels were added, lightweight aluminium panels used for the doors, bonnet and boot and quarter bumpers added to the front. Interior amendments included: a new centre-console for the remote control gear lever, different seats and facia, and a wood-rim steering wheel. The MKI model was made until 1966, during which time the most significant upgrades included the adoption of Ford's new 'Airflow' ventilation system and the replacement of the troublesome 'A' bracket rear suspension with leaf springs and radius arms.

This decidedly desirable second series 'Airflow' MKI was comprehensively restored around a new shell in the mid-1980s, while the Twincam Techniques engine featured increased compression ratio, enlarged ports, oversize valves, competition valve springs and high-lift Burton camshafts and breathes through a pair of twin choke 45DHLA Dellorto carburettors. The Lotus was thoroughly recommissioned in 2002/2003 by David Abbott at a cost in excess of £15,000 and then used to good effect by Don Rose in circuit races and hillclimbs, since when the car has seen little use. Very nicely presented in fast road specification and the classic combination of Ermine White and Sherwood Green side stripes, it retains its standard specification Black interior trim aside of a Cobra racing seat and Willans harness for the driver, and is now available complete with: large file of invoices; old FIA papers; competition photographs; and old MOTs, plus one valid to 16th September 2017.