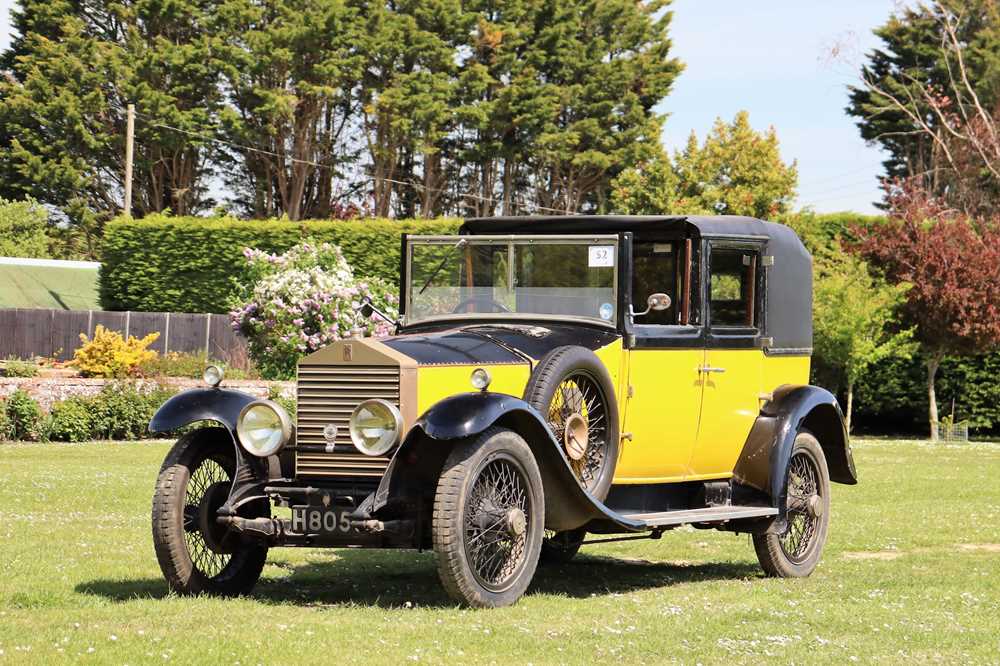 Taking delivery on 14th June 1926, the renowned London coachbuilder Hooper & Co proceeded to clothe chassis GUK20 as a Fixed Head Cabriolet. Although many observers would have termed it a Sedanca de Ville, the resultant four-door body (number 6586) was undeniably elegant and well proportioned. Supplied new to Ralph Hawkes of the leading music publishing firm Hawkes & Son, the Rolls-Royce was acquired by its second owner Prince John Bryant Digby de Mahe in 1937. An officer in the British Navy who had married into the Guinness dynasty, de Mahe chose to relocate to Kenya after World War II taking the 20hp with him. Used to commute between his horse stud in the Highlands and Nairobi as well as for boarding school runs, the Fixed Head Cabriolet proved surprisingly adept on unmade roads. Eventually replaced with something more practical, GUK20 changed hands a few times before acquired by Peter Strong and Guy d’Olier of Kitali during 1962 who set about undoing much of the wear and tear.

Bought by Peter Stearn thereafter, the Rolls-Royce was much enjoyed as part of the burgeoning African old car scene. Indeed, the car still carries plaques for the 1962 Nile Centenary Run and the 1963 Nairobi-Nakuru Rally. Tracked down by inveterate automotive super-sleuth Colin Crabbe in 1970, the 20hp was duly repatriated and sold to the vendors (good friends of his) the following year for the princely sum of £925. Very much part of the family for the past fifty-one years, the first entry in the Fixed Head Cabriolet’s running log reads: “7/8/71, on-road, with children, round Belgravia and to the Park (to feed the ducks) – six gallons, £2.30”, while a later one notes: “running well at 50mph, but the handling getting a little delicate at speed”. Subsequently entrusted to Crabbe’s Antique Automobiles for a new roof covering and retrimmed interior, the Rolls-Royce was also checked over mechanically and found to need nothing beyond new tyres! In pre-DVLA days, the London Vehicle Licensing Office proved most obliging by adding the 20hp’s existing Nairobi registration number ‘H 8055’ to its system (the H-series having also been an early London issue).

Never allowed to deteriorate to the point of requiring total restoration, GUK 20 is even thought to retain much of its original Yellow paintwork. That said, the following works have been carried out over time if only to ensure the car could participate in the vendors’ annual Boxing Day picnic (regardless of weather): Chassis and running gear overhauled – John Foy, Royston: wire wheels refurbished – MWS; electrics refreshed and rewired in conduits – Palace House workshop; windscreen and related items re-nickel-plated – Hoddesdon Platers; engine and ancillaries full bench overhaul – Arthur Archer; gearbox full bench refurbishment – PH workshop; wings repaired/repainted and running boards remade – PH workshop. Very much an oily rag car, ‘H 8055’ has not had much active use in recent years. Starting readily and running well during our recent photography session, the Rolls-Royce is awash with delightful details such as an elaborate curved division, period Bosch windscreen wiper motor, single fold-out rear jump seat, multi-piece windscreen, scuttle vents and triple door hinges (the central rears stamped with the body number: 6586).

Invited to participate in HM The Queen’s Golden Jubilee celebrations at Windsor Castle (2002) and the Centenary of Rolls-Royce festivities at Goodwood (2004), the 20hp has otherwise been enjoyed for family events and touring. A much-loved member of the vendors’ household since 1971, GUK20 is only reluctantly being offered for sale due to its owners’ lack of storage. Accompanied by a large history file, partial set of undertrays, new old stock tyres (x2) and assorted literature.