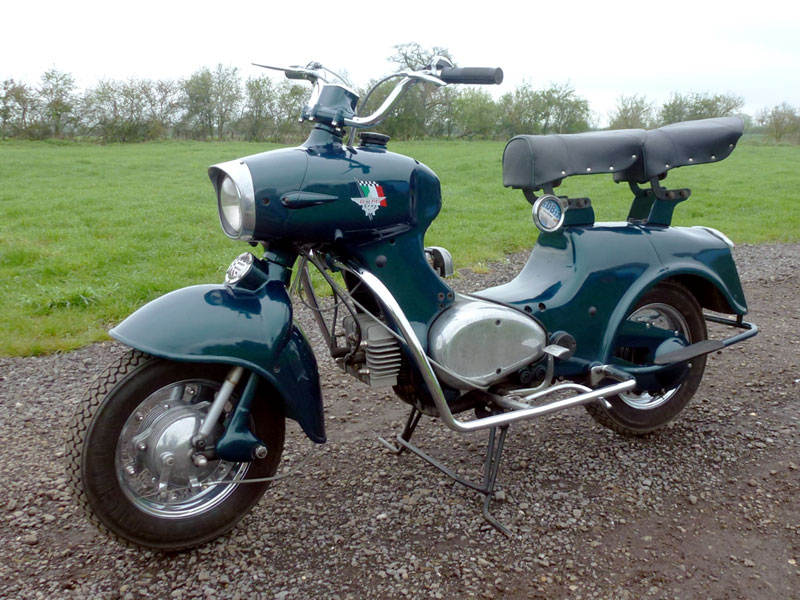 Originally a textile machinery manufacturer, Officine Fonderi Rumi designed and built a series of ingenious two-man submarines / torpedoes during WW2 before reinventing itself once again in 1949 as a motorcycle manufacturer. Based in Bergamo and headed by the brilliant Donnino Rumi (who insisted on sculpting full-size clay mock-ups of each new model), its first bike, the Turismo, was unveiled to the public at the 1950 Milan Show. Beautifully engineered, its smooth revving twin-cylinder 125cc two-stroke engine featured a 180-degree crankshaft. Reputedly capable of 90km/h, the newcomer was instantly recognisable thanks to its bulbous tank and 'floating' seat. Available to order with an equally slick aluminium sidecar by the Durapid company of Rome, it remained in production until 1956. 1954 saw the introduction of the Formichino (Little Ant) which, apart from the forks and crashbars, was almost entirely made of aluminium castings. Fitted with a 15mm Dell Orto carburettor the new model reinforced Rumi's position as the manufacturer of performance scooters. Later developments of the Formichino saw the introduction of 10 inch wheels in place of the original 8 inch units and a tuned Tipo Sport variant with a 22mm carburettor. This in turn was followed by the high performance twin carburettor Bol d'Or named in celebration of the Formichino's success in the gruelling endurance race.
This example has been restored during 1997 by the well known professional Eddy Jackson whilst the machine was in the hands of the previous owner, a founder member of the UK Rumi Club and is described as being in very good condition in all respects by the vendor. It is offered with a Swansea V5C and a current MOT certificate valid until the 7th September 2012.