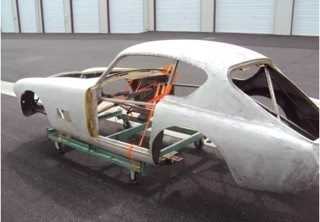 H&H are indebted to the vendor for the following information:

The car left AC's Thames Ditton factory in LHD configuration on 12th April 1958 with engine number 100D786. It was consigned to Procter Cars U.S.A and originally finished in White with Red upholstery.

Early ownership is not recorded although the Aceca is believed to have been raced. In 1976 the Coupe was in the care of a Mr T.A. Brown of Tyler, Texas and its last U.S. keeper was Glenn Barnett from Houston.

Purchased in 2016 by the vendor from the States less engine and gearbox as a project, a Bristol 100D engine was obtained together with a correct gearbox and both units totally refurbished albeit the engine awaits reassembly. A stainless exhaust was acquired together with a set of original instruments.

As often happens, other more pressing projects have taken precedence and the car is now for sale and is, we understand, complete with the exception of the front footwells, handbrake lever, dash panel and switches.

Now commanding serious money amongst enthusiasts, this represents a rewarding project in all senses of the expression.