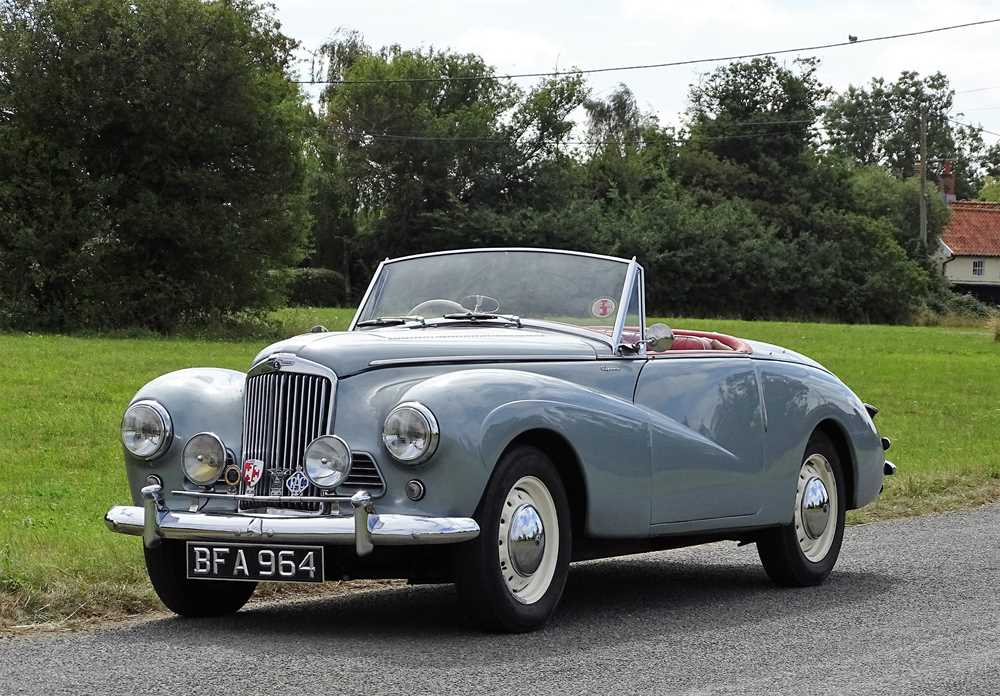 Fortunate enough to have owned a mouth-watering array of classic cars over the years (including some which would now be worth seven figures), the vendor acquired ‘BFA 964’ during May 2002 having long regretted passing up the chance to buy a similar Sunbeam Talbot Alpine in his youth. The car’s previous custodian, Wallace Marfell of Drybrook, Gloucestershire, owned a music museum and used the MK1 to ferry a small organ to events (hence the towbar still fitted). He also said that ‘BFA 964’ had been in his family from new; a claim the seller has never tried to verify (albeit the accompanying V5C Registration Document shows just two former keepers).

Displaying some 75,000 miles to its odometer when purchased, the Sunbeam Talbot Alpine has covered a further 25,000 miles over the past eighteen years with many of those being accounted for by European tours and rallies. Treated to some £80,000 worth of expenditure during the vendor’s tenure, the MK1 has been much improved by Gerald Brown of Merton Motorsport (and previously of Brown & Gammons). As well as a thorough engine overhaul, the two-seater had its steering, radiator, fuel system, suspension, brakes and back axle refurbished. Comprehensively rewired, ‘BFA 964’ has had its touring capabilities enhanced via the installation of an alternator, Mocal full-flow oil filter, Ford Type 9 five-speed manual gearbox, Kenlowe fan, detachable high level rear brake light, Kenwood CD stereo, SpeedPilot clocks, servo-assisted front disc brakes and H4 headlamps.

Benefiting from an extensive, ‘bare metal’ bodywork restoration and sundry interior trim work at the hands of renowned marque specialist Ken Sparkes during 2008, the result was – in Mr Sparkes’ words – ‘one of the best cars in the Club’. Sporting a stainless steel exhaust, the Sunbeam Talbot Alpine also boasts a reproduction ‘Special’ centrifugal air cleaner with fish tail inlet to feed its Weber downdraught carburettor. Last dyno tested in June 2017, the engine was found to be developing 75.6hp and 131.8lbft of torque at the wheels. The brightwork was refinished in 2016 (£1,272), while last year saw ‘BFA 964’ given a service by GM Autotech which encompassed new coolant and brake fluid etc (£734.41).

Starting readily upon inspection and running well during our recent photography session, this well-travelled and much-loved MK1 is a great touring car. Regretfully offered for sale due to time creeping up on the vendor, it is offered for sale with a voluminous history file and large / valuable spares cache which will need collecting from the vendor’s Suffolk home.