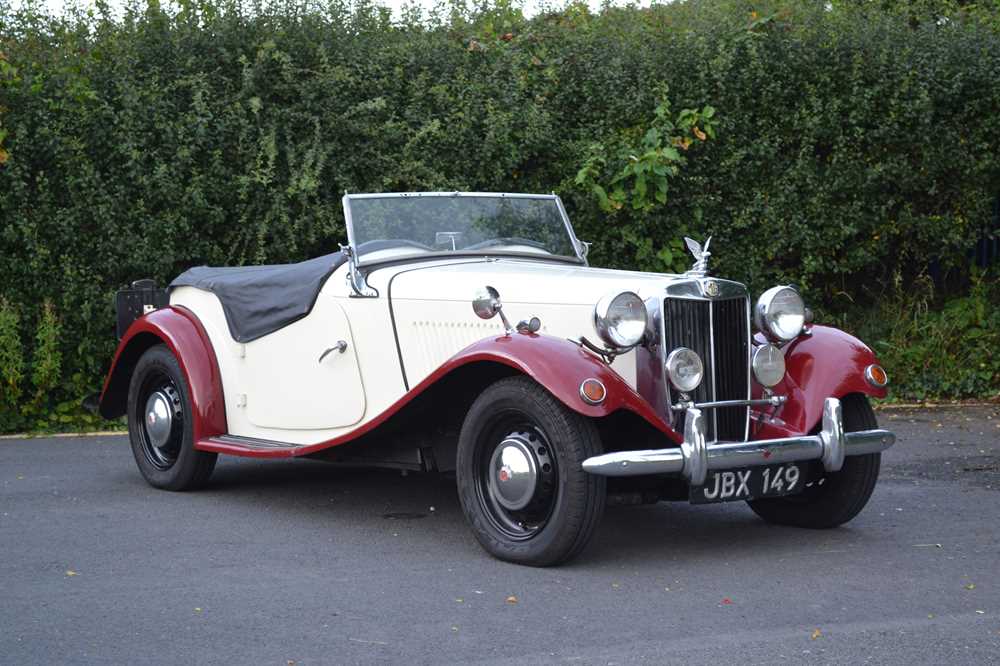 Although, instantly recognisable as a T-series model thanks to its perpendicular radiator shell, flowing wings and rear-mounted spare wheel, the TD broke important new ground for the Abingdon marque. The first MG sportscar to feature either independent double-wishbone front suspension or rack and pinion steering, the newcomer also boasted a hypoid-bevel back axle, hidden scuttle reinforcement hoop (save for the first few cars) and twin leading-shoe front brakes. Powered by the proven 1250cc XPAG engine allied to four-speed manual transmission, it was reputedly capable of 82mph and 26mpg. Riding on fifteen-inch steel wheels as standard, the TD also sported a mirror-image dashboard (thus facilitating either LHD or RHD production) and chrome-plated bumpers. A great success story, the vast majority of the 29,665 cars produced were sold overseas.

Finished in the handsome combination of Carmine Red and Old English White with Black leather, it is supplied with Black weather equipment (hood, sidescreens, full split tonneau and half tonneau). Dating from the last year of production, the MG is a rare 'home-market' car, making it one of only 1,656 made for the UK. Spending most of its life on the East Coast, this TD is the subject of an older restoration which was completed during the early 1990's, during which it was changed to the current colour scheme from its original Green. The TD was recommissioned for the road last year following a short lack of use with brake and engine overhaul. It has also been fitted with new tyres on all corners, a new brake master cylinder, new carburettor floats, in-line fuel filters, new fan belt, and an oil change during the vendors ownership.

Simply charming, 'JBX 149' is accompanied by a green logbook, a collection of older MOT's and invoices, and a picture of the car prior to restoration in its previous green. This particular example is rated by the vendor as being in "good overall' condition with "very good" in regards to its engine, gearbox, bodywork, interior trim and electrical equipment with it believed that the only electrical item that does not work is the clock. The chrome work on the car is original but is pitted in places. This TD Midget is showing 99300 miles; however, this is unwarranted. 'JBX 149' has had the wipers and motor removed, because the vendor informs that the car has not been used in the wet under his custodianship, nevertheless these are provided with the car ready for refitting. The TD is also supplied with a spare key, original starting handle, and original radiator cap.