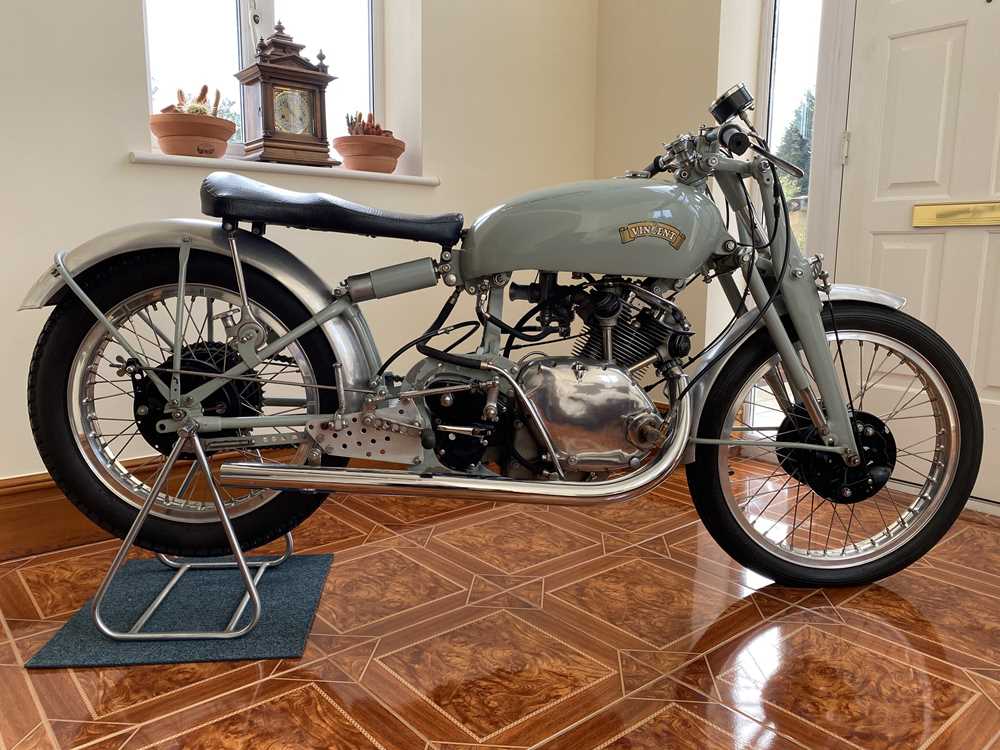 "I first tried to buy this bike during the 1970's when I encountered it in the paddock at Mallory Park being raced by Ted Davis (ex-Vincent test rider / chief engineer) and sporting a ‘For Sale’ sign. The owner of the bike had apparently purchased it from Vincent after they had closed the factory in 1955.

Racing and competition motorcycles will often go through a series of engine and frame changes during their careers and this certainly appears to have been the case with ‘LNK 650’. The bike is believed to have been used by the factory to try and set a 100mph average speed around Thruxton circuit but a series of engine failures saw the attempt called off.

The engine currently fitted does not have its crankcase halves numbered but does bear the number F5AB2B3782. The only visible frame number is on the rear swing arm and matches the accompanying V5C Registration Document. There is no frame number on the headstock. The associated area has been cut out possibly to allow the fitment of a fairing at some time.

The V5C Registration Document has the correct matching numbers as per the factory records for a Grey Flash. The original, Stevenage, registration number ‘LNK 650’ was first issued on 2nd August 1950. The history as I have been advised is that the bike was sold to Trivilato in Brazil but it is not confirmed if it ever actually went. It was then UK registered in August 1950.

From 1955 to the 1970's the bike seems to have been competed and ridden by Ted Davis but owned by someone else, who sold the bike at Mallory Park to a Mr Evans of the North Wales Motor Museum in Port Madoc, who at the time owned a Mercedes dealership, Regent Garage in Cricceth. Many years later when the museum closed the motorcycle was sold to a collector in Yorkshire before being sold to the current owner, who has kept it in storage in his hallway for a considerable time.

The factory parts on the motorcycle are magnesium Albion racing gearbox, BTH magneto, 32mm 10TT9 carburettor (all these parts are on the factory records, as having been fitted). The bikes also has racing Vincent Lightning finned brake hubs front and rear. The front forks are scalloped as is the main frame. The engine and gearbox plates are all drilled for lightness, the petrol tank is a genuine Vincent Lightning or Grey Flash item and is slightly longer than the standard Vincent tank. Comes with original paddock stand.

This bike has obviously been extensively campaigned during its life. As such, it has been much modified over time and bears the scars of competition. The owner recommends that the engine be recommissioned and new tyres fitted before any attempt is made to ride or race the bike.

Prospective purchasers are advised to make their own enquiries and form their own opinions as to the authenticity of this machine because there have been conflicting views expressed by several Vincent experts. Albeit several of the components are correct/correct specification"

PLEASE NOTE: The Vincent Owners Club have not provided a certificate of authenticity for this machine.