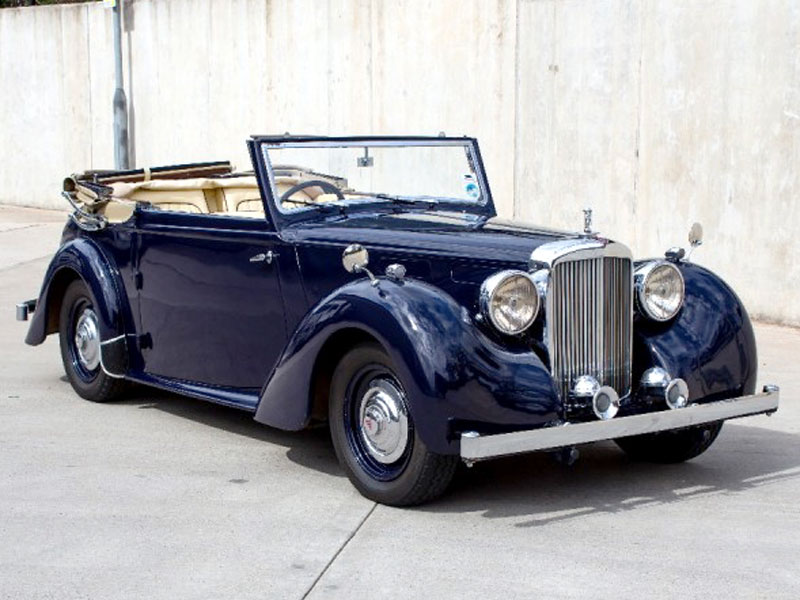 The TA14 was Alvis's first post-WW2 offering and was sold from 1946 to 1950, at which point the model was superseded by the TA21. The newcomer was available in two configurations: a four-door Saloon with coachwork by Mulliners of Birmingham, or two-door Drophead Coupe with body by either Tickford or Carbodies. The model was based on a widened and lengthened pre-war Alvis 12/70 chassis and retained that car's leaf spring suspension and mechanically operated brakes. However, whereas the 12/70 was equipped with wire wheels, the TA14 was fitted with steel disc rims. It was powered by an enlarged 12/70 engine - a four-cylinder unit of 1892cc that produced 65bhp and drove through a four-speed manual gearbox. The output was sufficient to accelerate the Alvis from 0-60mph in just over 22 seconds and on to a top speed of 74mph. Some 3,311 TA14s are said to have been produced during the four years of production.

This splendid-looking 1948 Tickford Drophead Coupe is rumoured to be one of only 26 examples remaining worldwide. It was supplied new to its first owner, Colonel Erskine of Sydenham, by London Alvis dealer Brooklands of Bond Street. For most of the last 20 years it has reportedly remained in the care of an ardent Alvis Owners' Club member who has lavished over £20,000 on it; including £6,000 spent refurbishing the engine last Autumn. The car's leather-bound history file contains receipts for work carried out back to the mid-'80s, as well as lots of past MOTs and one valid into March next year. The vendor describes the Alvis's Navy Blue paintwork, Chocolate Brown-piped Cream leather interior, engine and transmission as all being in "excellent" order. The carpets are new, the walnut wood trim has recently been French polished and is now described by the vendor as "stunning", and the wheels have been restored, colour-keyed and shod with new tyres. The 'Colonel's Head' radiator mascot has apparently been in place since the 1940s and is therefore an integral part of the provenance of this rare and seemingly very original motorcar.
Share: