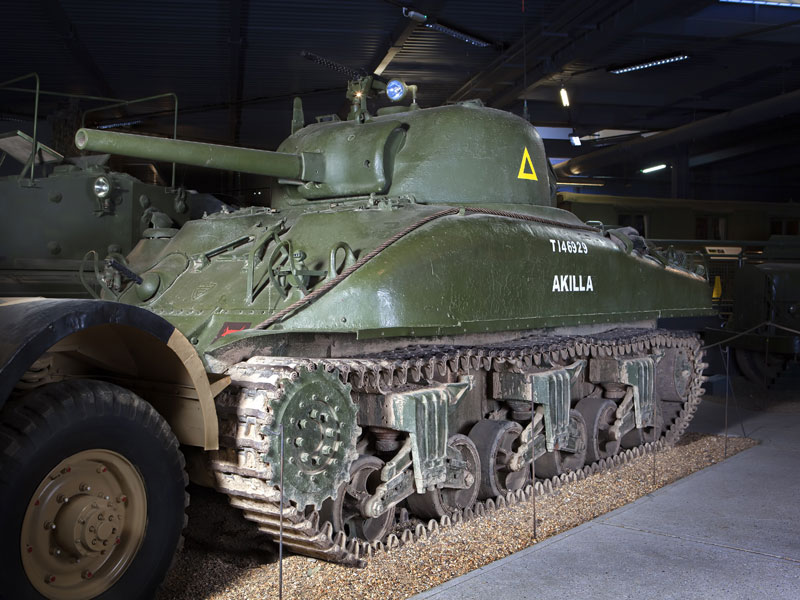 Nicknamed 'Sherman' after the American Civil War General William Tecumesh Sherman, the M4 Medium Tank played a vital role during World War Two. The second most populous Allied tank behind the Russian T-34, it was designed with reliability, ease of production / repair and mobility in mind. Palpably superior to the German Panzer III and IV tanks upon its debut with the British Army at El Alamein in autumn 1942, the Sherman was outclassed by later Third Reich designs in terms of armour, range and speed but continued to triumph often due to sheer weight of numbers.

Responsible for equipping the nascent Canadian Armoured Divisions since the fall of France, the Montreal Locomotive Works switched from making the M3-based 'Ram I/II' to the M4-based 'Grizzly I' during autumn 1943. Understandably similar to its American counterpart, the latter boasted the same vertical volute suspension, traversing turret, 5-man crew, 75mm armament and Continental 9-cylinder 350hp radial engine. Initially fitted with US tracks, a lot of Grizzlies were converted to Canadian Dry Pin (CDP) tracks which were lighter, simpler and more tarmac friendly yet did not require rubber (a scarce resource following the Japanese advance into Southeast Asia).

Within months it became obvious that demand for Sherman tanks was being met by existing US facilities. As a result the Montreal Locomotive Works completed just 188 Grizzlies before re-tooling for the Sexton MKII self-propelled gun. Reportedly used for training on both sides of the Atlantic rather than frontline combat, it is nonetheless thought that a few were deployed to Italy. Better preserved than their US contemporaries, some fifty-odd Grizzlies were sold to Portugal during the 1950s as part of the NATO military assistance programme. Demobbed three decades later several were brought back to the UK and have formed part of private and museum collections ever since.

Notable as the very first of the 188 made, CT160194 has been in the current ownership since 1984. Understood to have been used for training purposes during World War Two, the Grizzly I later saw service with the Portuguese Army. Despite reputedly participating in the Angolan War of Independence, the Sherman's remarkable state of preservation suggests that it has never come under heavy fire. Loaned to various museums over the past thirty-one years including its present circa two decade stint at IWM Duxford, the tank is said to require minor recommissioning prior to use.

Noting that work is needed to various electric and hydraulic cables, the vendor variously rates the Grizzly as 'excellent' (engine, manual transmission, body), 'excellent / good' (paintwork) or 'good / fair' (interior). More complete and original than many of the Shermans that have come to market in recent years, CT160194 - a.k.a. Grizzly No.1 - has its own place in history.
Share: