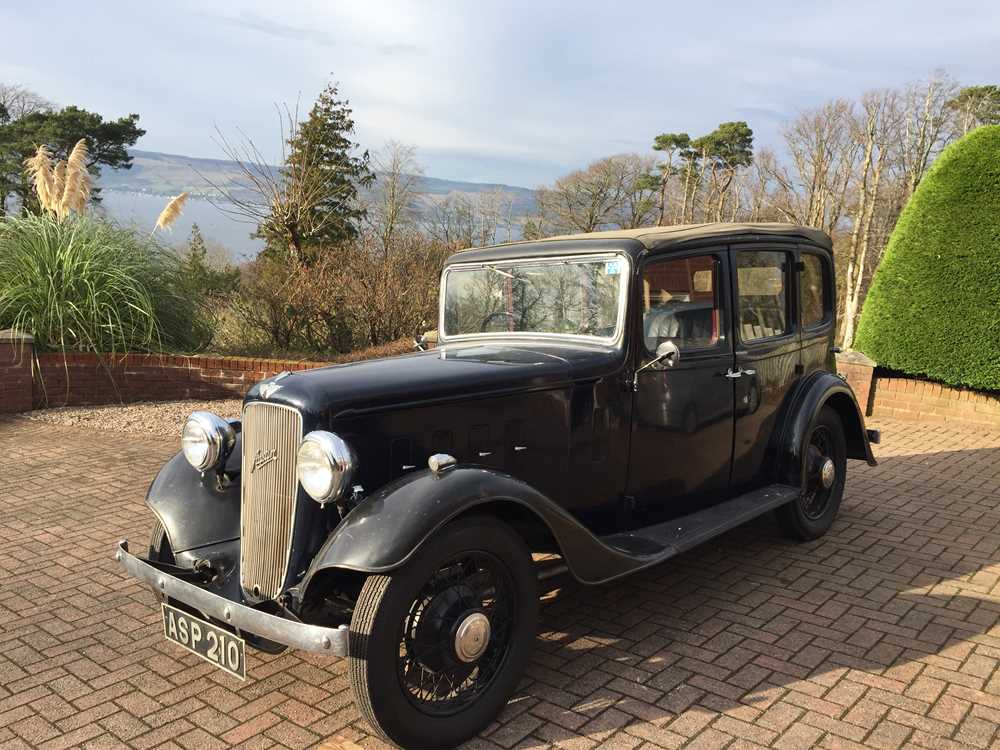 The vendor has supplied us with the following description:

With the standard Ascot saloon costing £208, with hood conversion by Salmons Coachbuilders was approximately £36 at that time. Surviving examples of Tickford Hood conversions on standard saloons are now extremely rare, as are original examples of Salmons Tickford coachbuilt bodies.

Registered ASP210 in Fife, October 1935 the first lady owner and her chauffeur used it as a second car for local journeys and for charitable work during WW2. In 1947, on return from war service, the present owner’s father was employed by the lady owner, using the car for local work on the estate alongside a succession of more modern cars. It was finally ‘retired’ from service and laid up in the superb Edwardian motor house, and in 1971 the car with some 57000 recorded miles was bequeathed to the vendors father and subsequently registered to the vendor who passed his test in the car in 1955.

Used minimally over the past 50 years covering only 1000 miles, thought to be retaining c.75% of its original paintwork. In the early 1950s the outer material of the original hood assembly required to be replaced due to shrinkage and fading. The owner insisted that the replacement should have a larger opening than the standard Tickford style rear window but since this did not mate up with the folded down profile of the mechanism the new hood covering was fitted in the permanently fixed position. All the original mechanism with chrome crank handle, internal headlinings and related items were retained in position as fitted. The original, slim profile chromed rear window frame has been retained along with a new glazing panel and fixing screws. All the parts required to restore the hood to the original operating function and appearance are with the car should the new owner wish.

Mechanically in original specification, and in complete and working order, starting ‘on the button’. The car was provided with mechanical restoration in the 1970’s including new kingpins and steering ball pins, universal joints on prop shaft, suspension bushes and Luvax shock absorbers. The chassis and related components are in excellent overall condition with original factory paint still showing. Further refurbishment was completed in 2007 including a new block (following a hair crack in the original being found) and a complete overhaul of the engine using many new parts, including pistons, bearings, timing chain and sprockets, along with other mechanical work including new radiator core and relined brakes.

The car has been managed in a conservation rather than restoration mindset, however some work is now required to the front doorcards and boot presentation.