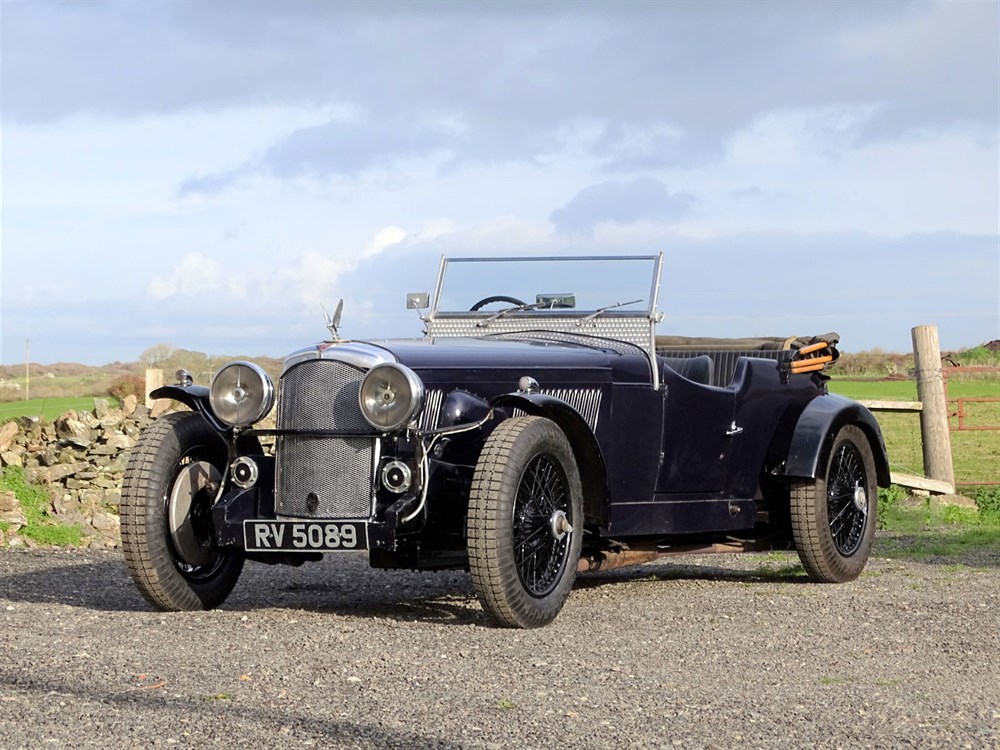 Supplied new by Messrs Wadhams Bros of Waterlooville to Albert Coffin Esq. of Cosham, car number 16240 began life as an Alvis Crested Eagle T.E. 19.82 Limousine complete with an 11ft 0in wheelbase, 4ft 8in track, independent front suspension and four-speed all-synchromesh gearbox. First road registered as 'RV 5089' on May 11th 1934, the accompanying original buff logbook also shows that the Alvis was retained by Mr Coffin for twenty-nine years before subsequently belonging to F.E. Salter Ltd of Chichester, Anthony R. Trump Esq. of Aldingbourne, Kenneth R. Adams Esq. of Ross-on-Wye and Peter James Williams of Hereford. The latter became the Crested Eagle's registered keeper on 14th March 1978 by which time it had lost its original Mayfair coachwork and acquired a replacement Silver Eagle SF 16.95 straight-six engine. Sundry bills on file indicate that Mr Williams had the engine overhauled (reground crankshaft, new bearings etc) and the radiator refurbished. He is also believed to have been responsible for converting the car into a Special during the early stages of his twenty-year ownership. The Crested Eagle chassis was shortened (the wheelbase now being circa 9ft 10in) without removing the cruciform bracing and a two-door, four-seater Tourer body fitted in the style of Vanden Plas. Initially 2148cc, the Silver Eagle SF 16.95 engine (numbered as 12237) is now thought to displace approximately 2.5 litres. Fed by triple SU carburettors and twin SU fuel pumps, the straight-six also boasts a bespoke, heat-wrapped tubular exhaust manifold and electric fan. The four-speed all-synchromesh gearbox is a delight to use and the throttle pedal has been repositioned to the right (it was originally in the centre). The hood is rumoured to have come from a Bentley 3 Litre Speed Model of similar dimensions and the powder coated 19-inch wire wheels are shod with Blockley tyres.

Purchased by previous keeper - H.K. Gallagher Esq. - from Mr Williams during August 1998, 'RV 5089' was entrusted to Vintage and Historic Car Restoration and Race Preparation Specialist Bill Roberts of Wokingham for attention to its four-wheel drum brakes and ignition system (the associated bills exceed £2,200). Entering the current family ownership the following year, the Alvis was much improved by the late Larry O'Connor (an ex-REME trained mechanic who worked for Mark Knopfler, Frank Dale & Stepson and Sotheby's etc). As well as thoroughly overhauling the carburettors, Mr O'Connor fitted new fabric couplings to the drivetrain and fresh engine / radiator rubbers. Peter Lander of Sigma Engineering 'rolling road' tuned the car in June 2006 (altering the carburettor needles to suit) and Forge Garages of Gillingham, Dorset also carried out servicing and MOT work. Used for some light competition work including a RAC MSA 12-car navigation rally and local hillclimb where it finished 2nd-in-class behind a Porsche 911 (albeit those were the only two over 2-litre cars competing!), the Alvis has mainly been enjoyed on high days and holidays over the past twenty years. Capable of cruising at an indicated 60-65mph when last driven on the motorway network, it has recently been treated to some £5,000 worth of refurbishment work including a service. Acquired by the vendor and his father because they felt it drove more like a 1950s car than a 1930s one, the Special has only broken down on them twice (once when it ran out of fuel and a float stuck and once when a valvegear nut worked loose). Alvis identified their products with both a chassis number and a car number. 'RV 5089' has always been registered under its car number of 16240. Its chassis number, 11050, is correctly stamped into the original cast aluminium bulkhead. The V5C Registration Document lists the Make as Alvis, the Body Type as Tourer, the Chassis Number as 16240, the Engine Number as 12237 and the Colour as Blue/Black. Responsible for creating countless fond memories, 'RV 5089' (also known as 'Harvey') will be much missed. Currently insured for £30,000, it is offered for sale with original buff logbook, copy Alvis factory Car Record, V5C Registration Document, dog eared Speed Twenty Instruction Book and history file.