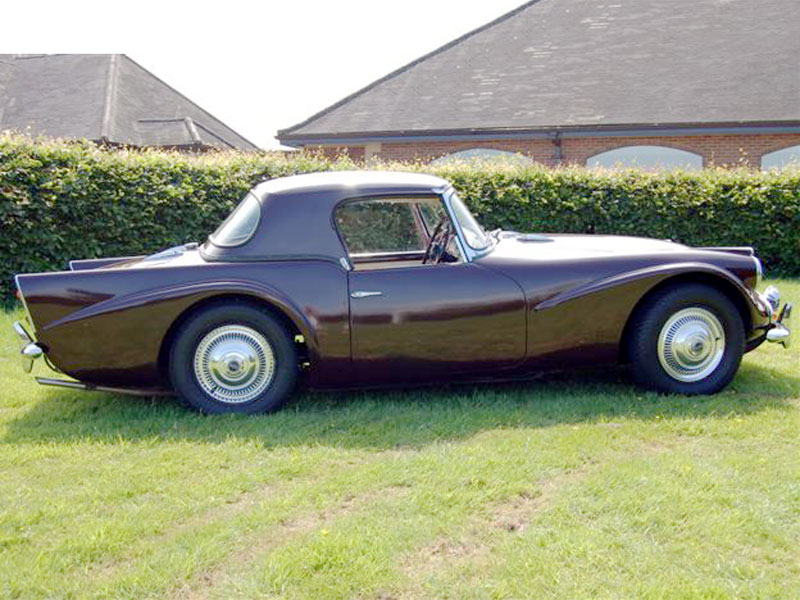 Daimler launched their new sports car at the New York Motor Show of 1959. They wanted to crack the American market and the styling had transatlantic overtones to suit. The car was originally called the Dart, but Daimler quickly succumbed to the threat of legal action from Chrysler's Dodge division and rechristened it the SP250. The newcomer was clothed in a tough fibreglass body and built around a traditional cruciform-braced ladder-frame chassis, the initial version of which (as found on A specification cars), was sadly lacking in torsional rigidity. By 1960, the Daimler Motor Company was in Jaguar's hands and the so-called B specification SP250s featured a much stiffer frame, equipped with additional outriggers and a strengthening hoop between the B posts. The jewel in the car's crown was its engine, a silky smooth 2.5-litre V-8 unit designed by Edward Turner and featuring the revolutionary hemispherical combustion chamber technology he pioneered on his Triumph motorcycle engines. With 140bhp on tap and a low all-up weight, the Daimler's performance was strong and the sound was one to savour. Suspension was independent with wishbones and coil springs at the front and a live axle hung on leaf springs at the rear. Braking was by hydraulically-operated discs all-round. According to the Motor magazine test of the period, the SP250 could accelerate to 60mph in a creditable 8.9 seconds and continue on to a top speed of 123.7mph.

The 1962 B specification SP250 on offer is a right-hand drive car equipped with the standard four-speed manual gearbox. It is finished in maroon complemented by a cream leather interior. The car was reputedly supplied new by Stratstones of London to a Carlisle estate agent, Mr Balderstone; passing into the hands of local joiner/undertaker Mr Kendall two years later. The car was laid up for some 12 years during the Kendall family ownership and needing some light recommissioning when passing into new hands. The vendor purchased '145 DLE' via our Buxton sale of June 2007. Equipped with optional bumpers and heater and riding on steel disc wheels, this well preserved SP250 comes complete original handbook, hood and hard top.

PLEASE NOTE: The clutch on this lot is biting / engaging towards the top of its travel.