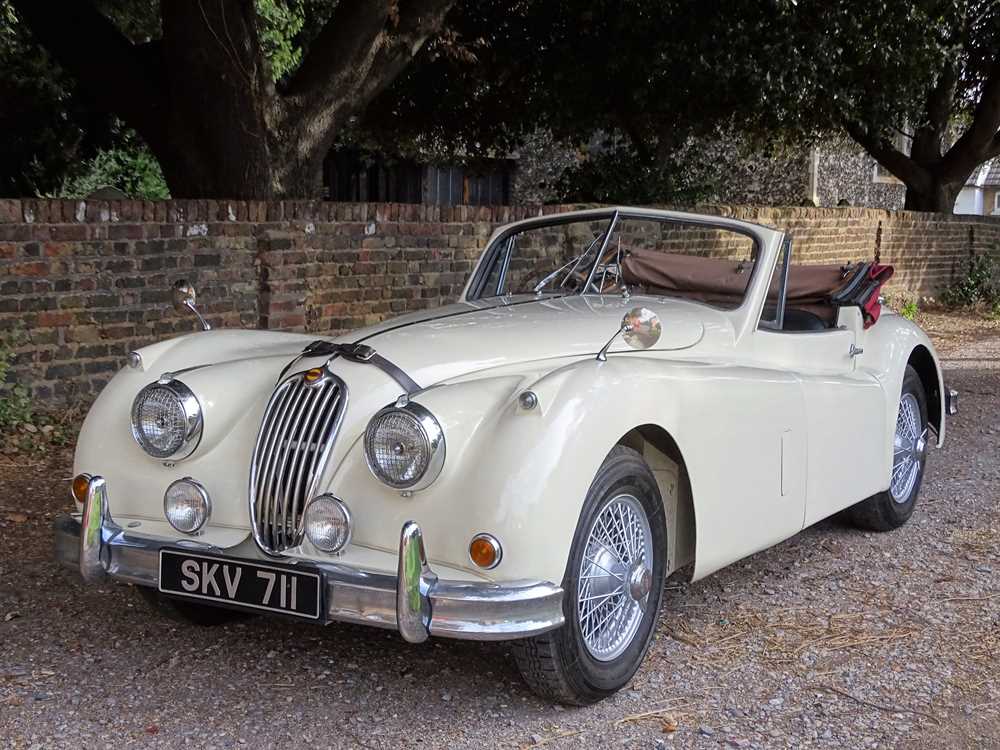 According to its accompanying Jaguar Daimler Heritage Trust Certificate, chassis 807458DN was built to right-hand drive specification on September 11th 1956 and supplied new to Lieutenant R.C. Hallinan whilst he was stationed in West Germany under the ‘Personal Export Delivery’ scheme. Originally finished in Cream and issued with the Coventry registration number ‘SKV 711’ prior to despatch, the Jaguar subsequently returned to the UK where it starred in a 1962 episode of the Edgar Wallace Mysteries entitled ‘Candidate for Murder’ (the Edgar Wallace Mysteries were a series of second feature or B-movies that were later shown on television). Known to have belonged to Richard Green from 1962-1969, the XK140 had migrated to France by 1989 where its then owner, Monsieur Kuhn-Crosier of Lyon, commissioned an extensive restoration which included upgrades for Alpine rallying. As well as being repainted Red and re-trimmed with Black leather, the bodywork was de-seamed and fitted with full metal floors. The consequent increase in rigidity benefiting both the Drophead Coupe’s strength and handling.

Appearing at a Monaco auction some 10,000 miles later, the Jaguar was bought by Gerald Harvey who drove it back to the UK. Re-registered with the DVLA on June 1st 2002, the XK140 had been returned to its initial Cream livery and rewired by the time the previous registered keeper acquired it the following August. Part of a private Cornish collection for the last decade, ‘SKV 711’ has seen very little use. However, it did pass a MOT test on September 24th 2020. A potted history of the Drophead Coupe compiled by Mr Harvey remains on file and notes that: ‘Guy Broad, XK expert and supplier of XK parts, confirmed the engine to be a factory rebuilt or exchange unit, built to better than C-Type specification, to include a ‘Big Valve’ head (vehicle runs on unleaded)’. Recent cosmetic work has self-evidently encompassed repainting the wire wheels and renewing the mohair hood. Offered for sale with V5C Registration Document and history file.

Launched at the 1954 Motor Show, the XK140 boasted the same bewitching styling as its forebear but allied it to a host of important mechanical improvements. Chief among these was the adoption of rack and pinion steering. Though, the fitment of telescopic shock absorbers (in place of the XK120's antiquated lever arm dampers) also had a noticeably beneficial effect on handling / roadholding. With its engine and bulkhead repositioned three inches further forward, the new model enjoyed a notably roomier cabin (the fixed and drophead coupe variants gaining occasional rear seats as a result). Available in 'standard', 'special equipment' or 'special equipment plus C-type cylinder head' guises, power and torque outputs ranged from 190bhp / 210lbft to 210bhp / 213lbft. Distinguished by its one-piece bumpers and simpler, more imposing radiator grille, the XK140 was among the fastest cars of its generation. Reputedly capable of over 130mph, it focused public consciousness on Jaguar's continued success at Le Mans (the Coventry marque winning the endurance classic in 1951, 1953, 1955, 1956 and 1957).