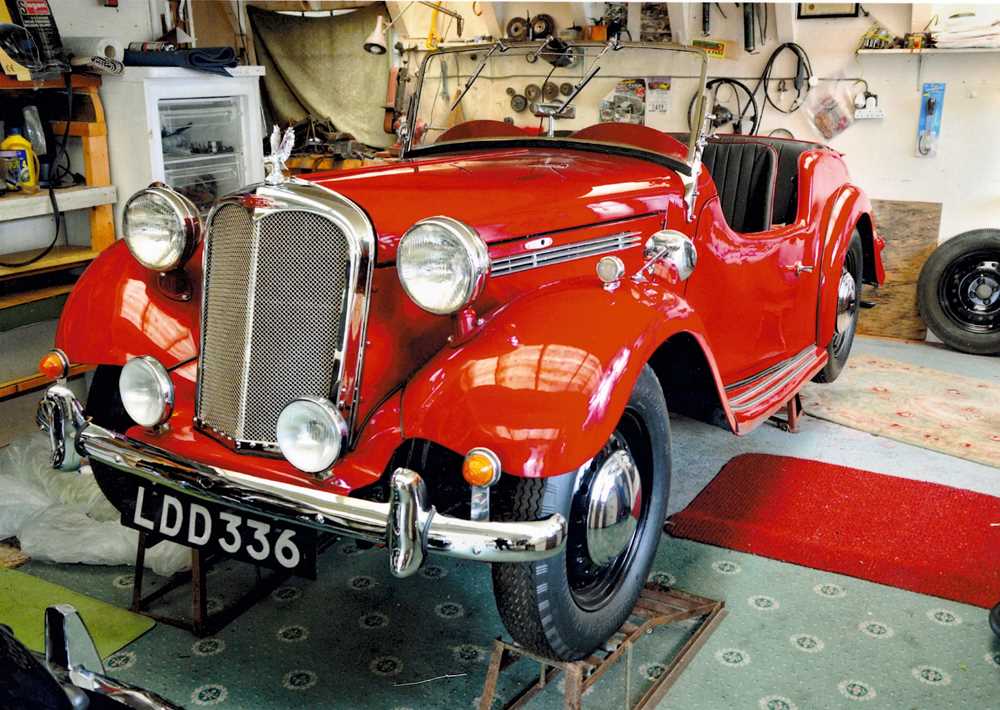 Thought to be one of only 1,000 or so 4AB Roadsters made, chassis 4AB7922 was despatched to supplying dealer G. Healey & Son of Gloucester on 25th October 1951. Road registered as ‘LDD 336’ early the following month and uprated with a larger Singer 10hp OHC engine at some stage, the four-seater is understood to have spent much of its life in dry storage. ‘Mothballed’ when the vendor’s late husband first encountered it some thirty-five years ago, he finally managed to buy the Roadster on May 14th 2017. A highly skilled welder and fabricator who had restored everything from a Bullnose Morris Tourer to a Bedford CF Day Van via various Alvis cars, the vendor’s late husband began stripping the Roadster as soon as it came off the trailer! Sadly, his death earlier this year prevented the project’s completion. However, as even a cursory inspection will confirm, a huge amount of cosmetic and mechanical work has been carried out. Finished in Red with Black upholstery, ‘LDD 336’ sports a wood-rimmed steering wheel, turned aluminium dashboard, fabric hood and full-length tonneau cover. The odometer shows a credible but unwarranted 50,000 miles. Worthy of a return to the road, this attractive Singer is offered for sale with V5C Registration Document, copy Service Manual, Singer Owners’ Club correspondence and sundry paperwork.

The Singer Roadster was a two-door, four-seater Convertible version of the Bantam Saloon and was first sold in 1939. The traditional body comprised alloy panels fixed to a wooden frame. Power came from the same 1074cc four-cylinder OHC engine found in the Bantam, but the output was slightly higher (36bhp), courtesy of a superior inlet manifold and downdraught SU carburettor – sufficient for a top speed of around 65mph. The unit was initially mated to a three-speed manual gearbox. The suspension was by leaf springs all round and the drum brakes were mechanically operated. The model re-emerged virtually unchanged after the war and remained so until the 4A variant of 1949. This featured a Solex carburettor in place of the SU and benefited from a four-speed gearbox. The 4AB of 1950 sported a new chassis with independent coil spring front suspension and a mix of rod/hydraulic brakes.