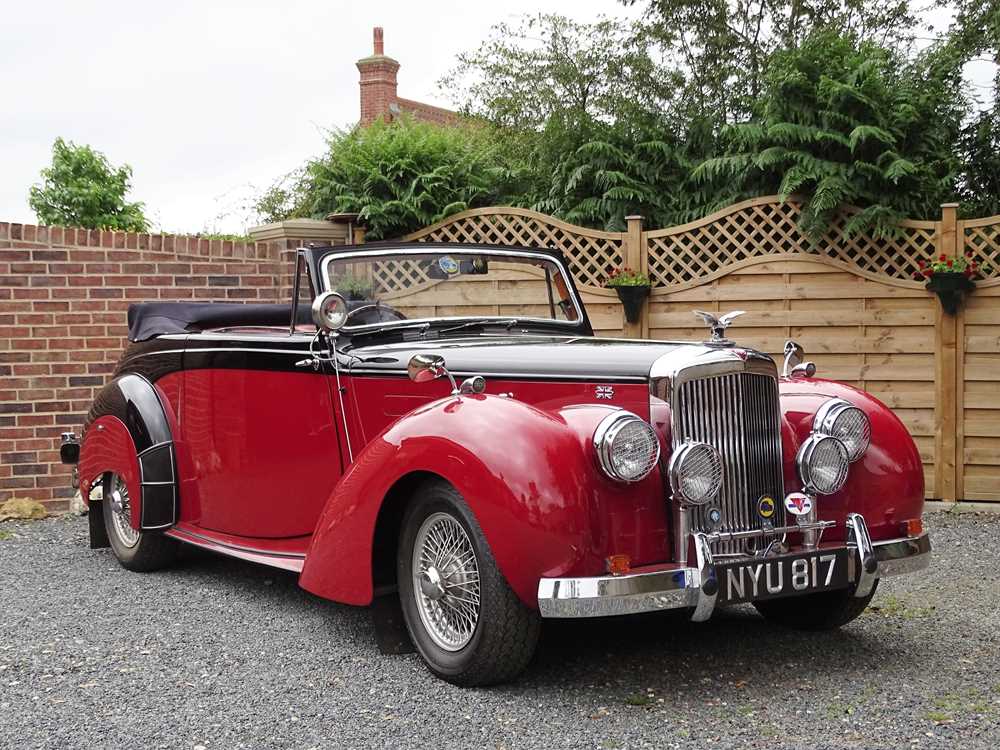 Originally earmarked for the American market where Alvis had hoped sales would be plentiful, chassis 25116 was converted from left- to right-hand drive and completed on 9th October 1953. Delivered to marque concessionaire Brooklands of Bond Street, London W1 the following month, it was issued with the local registration number ‘NYU 817’. The Drophead Coupe’s first years are a mystery but by the mid-1960s it had relocated to Aberdeen and been upgraded with a more powerful TC21 engine. Belonging to J. Buchan and A.J. Burrell that decade, the four-seater then passed to George Winram of the Aberdeen Blind Company in whose family it would remain until being bought by hotelier Neil James of Inverurie during 1996. Mr James entrusted the TA21 to the Kinghorn Bodyshop of Aberdeen for a photographically documented, ‘bare metal’ restoration with assorted parts being sourced from marque specialists Walkers Radiators and Red Triangle. Featured in various Alvis Owners’ Club Bulletin magazines thereafter, ‘NYU 817’ achieved a degree of success in concours competitions. Migrating to Edinburgh and the custodianship of Dr Richard Legge in 2003, the Drophead Coupe was then resident in Brecon with Andrew Morton before being bought by Londoner Nicholas Broadhead during 2010. The latter had Red Triangle fettle the brakes and suspension, carry out some minor bodywork repairs, convert the engine to unleaded fuel, replace the exhaust and renew the underseal not to mention fit an alternator, Kenlowe fan, modern stereo, power socket (with USB insert) and halogen headlights. The associated invoices on file total some £20,000. Further improved since entering the current family ownership in October 2012, the vendor’s late husband – a skilled welder and fabricator with numerous restorations to his credit – installed variable rate electric power steering and a five-speed manual gearbox for more relaxed high-speed cruising. Still highly presentable albeit not concours, ‘NYU 817’ started readily upon inspection and ran well during our recent photography session. Offered for sale with V5C Registration Document, restoration photo albums and history file.

Introduced at the March 1950 Geneva Salon, the Alvis TA21 was powered by a brand new 3 litre, straight-six OHV engine. Featuring a seven-bearing crankshaft and near ‘square’ (84 x 90) bore and stroke dimensions, it proved notably smooth and flexible. Based around a sturdy box-section chassis equipped with independent coil and wishbone front suspension, a 'live' Salisbury back axle, telescopic shock absorbers and four-wheel Girling hydraulic drum brakes, the TA21 was a natural rival to the Bentley MKVI and Lagonda 2.6 litre. Available in either Mulliner Sports Saloon or Tickford Drophead Coupe guises, it was deemed by Autocar magazine to be fitting for ‘discerning owners who appreciated quality and good handling as well as mere performance’. Decidedly rarer than its ‘tin top’ sibling, just 303 Drophead Coupes were made.