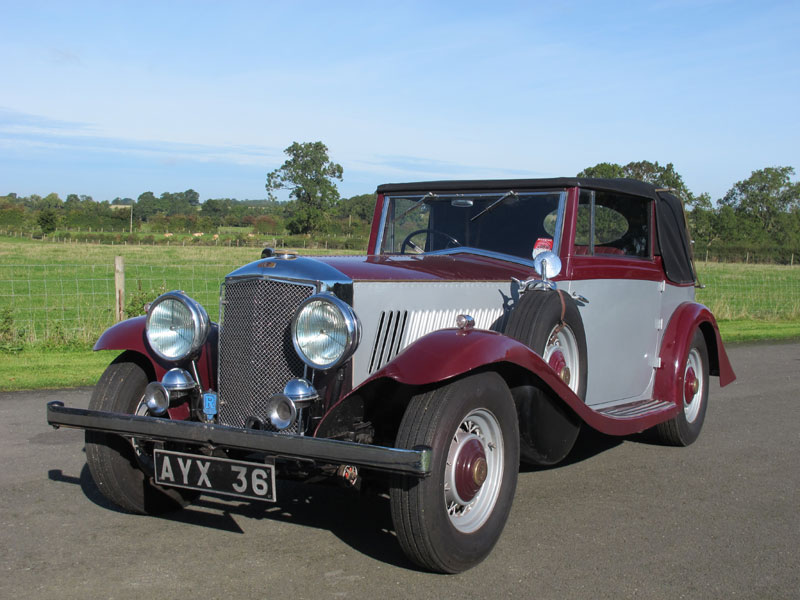 Carrying rare Berkeley drophead coupe coachwork on a Hudson Terraplane chassis, AYX 36 is finished in red over light silver coachwork with burgundy leather interior. Understood to have been first owned by Retford garage owner, Ken Hemprall, an image of the car taken at his garage in 1949 is contained in the accompanying history file. A note on file states it was fitted with a six-cylinder engine at this time, and that subsequently a replacement 8-cylinder unit dating from 1937 was installed.

The second owner, Syd Bartack, also of Retford, changed the colour from its original blue to maroon and used it as a family runabout for many years. By 1981, the car was in the custodianship of a Mr Burnett who carried out a number of works including repainting, reupholstering and the fitment of twin side mounts with the intention of competing in the Paris to Peking rally. In 2003, the car was sold to John Biggs who tasked himself with returning it to a more original specification. A list of works carried out from 2003 appears in the history file and includes: attention to the cooling system, engine and gearbox overhaul, attention to the clutch, ignition and fuel system, rewiring of the electrical system, new dashboard, new axle bearings and seals and the fitment of a new hood. Acquired by the vendor in 2008, the car has formed part of his small private collection since purchase.

An extremely elegant Railton combining sporting performance with the style of a drophead coupe, AYX 36 is offered with Swansea V5C document, assorted invoices, photographs and aforementioned list of works carried out since 2003, photocopy technical handbook and a copy of the Peter Sheffield Memorial Register of Railton cars.
Share: