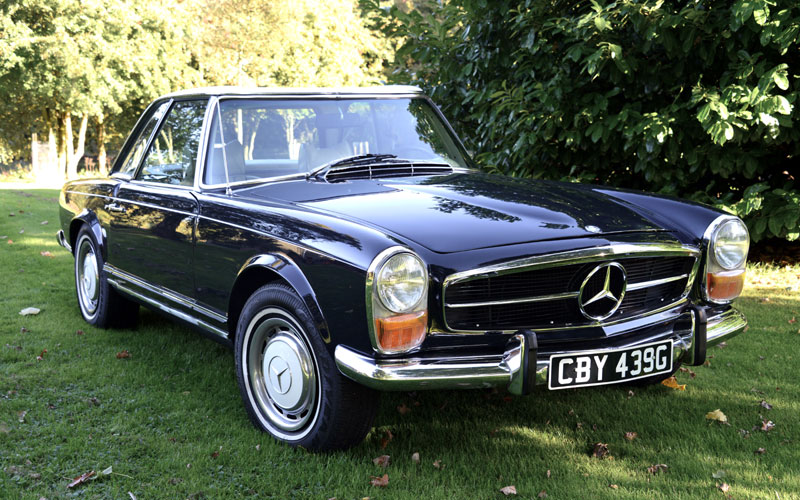 Last of the iconic W113 line, the 280SL was launched in 1968. Blessed with the same effortlessly elegant Paul Bracq styling as its earlier siblings, it was powered by a new seven-bearing crankshaft 2781cc straight-six engine that developed some 180bhp and 193lbft of torque. Equipped with all round independent suspension and ATE disc brakes, its 'square' track (some eight inches wider than the contemporary Jaguar E-type) gave notably sure-footed handling. Able to blur the divide between city streets and open roads with ease, the majority of 280SLs were specified with four-speed automatic gearboxes and power assisted steering.

This left-hand drive, automatic transmission 280SL is finished in Dark Blue with Beige interior and has the desirable specification of power steering with both hard and soft tops. Having been delivered in Germany it's believed to have then resided in the USA according to the stamped service booklet and included invoices from Bowers Garage of Zelienope, Pennsylvania. Registered in the UK in March 2008 the current vendor is the third UK keeper purchasing the Mercedes in 2013. An Un-restored example 'CBY 439G' currently displays 88,219 kilometres (approximately 54,800 miles) and is described as in 'good' condition with regards to the interior, engine, bodywork and paint. This desirable 280SL 'Pagoda' is offered with the aforementioned service history, owner's manual, and Swansea V5C document. Earlier this year the Mercedes received a service and mechanical check over at c. £1,000 and is offered with a current MOT certificate into September 2016.
Share: