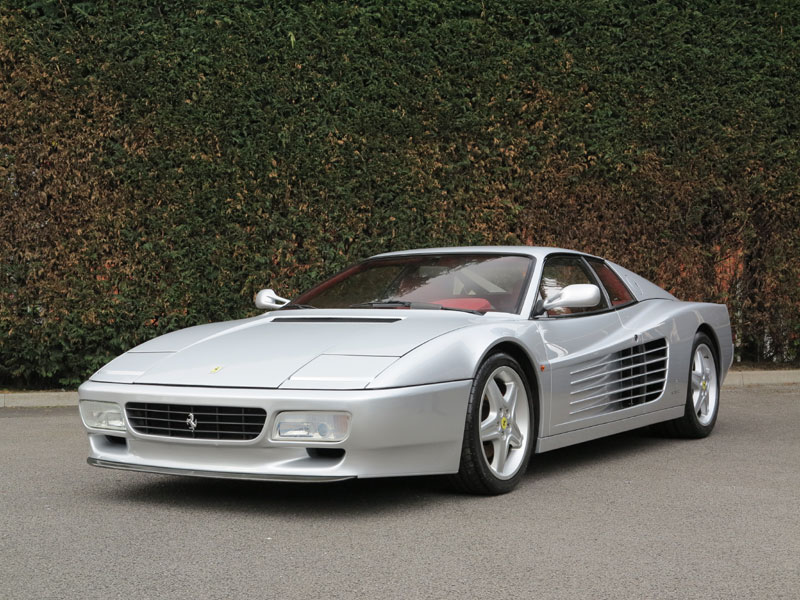 Introduced at the 1984 Paris Salon, the Testarossa caused a sensation. Developed with the aid of a wind tunnel it combined a low drag coefficient with impressive negative lift characteristics (hence the lack of extraneous aerodynamic aids). As well as greater interior space, drivers also benefited from an adjustable steering column, re-profiled seats and air conditioning. Extensively reworked, the 4942cc flat-12 was lightened by 20kgs and featured ellipso hemi-spherical combustion chambers, four-valve cylinder heads and Bosch KE-Jetronic fuel injection. Developing some 390bhp and 362lbft of torque, it was mated to a five-speed manual gearbox but kept in check by twelve-inch discs all-round (gripped by four-pot callipers) and a limited slip differential.
In 1991 the final version of the iconic 1980's Testarossa came in the form of Ferrari 512 TR costing £136,000 when new. The new TR represented a significant step up in Ferrari performance. With 41 more horsepower than its predecessor, the new 428 bhp engine achieved 0-60 mph in just 4.9 seconds and would go on to a 195mph top speed. The chassis was extensively reconstructed, as was the 5 speed manual transmission and brakes. The bodywork received a minor facelift and this gave the TR a more aggressive stance. Predictably exclusive, production totalled 2,280.

Finished in Argento Metallic with Red leather interior it's believed the sale car is only 1 of 6 finished in this combination. Displaying 32,078 kilometres (approximately 19,932 miles) we are told the 512 TR has formed part of a well maintained extensive Japanese collection. Having been Nova registered after recently arriving on these shores the Ferrari is offered with its original tool kit. A sought after model in a desirable colour combination.

PLEASE NOTE: Should this lot remain in Europe, it will be subject to VAT (20%) on the full purchase price (both the hammer price and the commission).
Share: