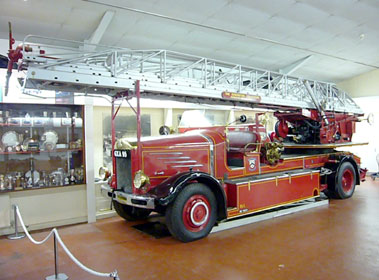 
Lot details
Registration No: GXA 95
Chassis No: 3161A
Mot Expiry: None

Founded on 18th August 1941 as a response to the London and provincial Blitzes, the National Fire Service lost little time in ordering a fleet of new Fire Appliances. Leyland and Dennis were the largest contemporary manufacturers and both were commissioned to produce a range of machinery from quick response Tenders through to heavy-duty Turntables. Between 1941 and 1943 Leyland built some forty-three Turntable Fire Appliances including this one, chassis number 3161A.

Merryweather of London were responsible for installing the fire fighting equipment including a Sulzer engine-driven pump on the rear deck which primarily supplied water to the nozzle at the head of the ladder. Designated the Type A, the ladder could extend to 100 feet and was hydraulically operated via a power take off from the road engine which in the case of chassis 3161A is a Meadows 9.5 litre petrol unit.

First registered to the Home Office (hence its unusual `GXA 95' number plate), the Dennis was initially allocated to The West Riding of Yorkshire region and spent the war years stationed at Goole. When the National Fire Service was disbanded in 1948 and control given back to the various local authorities, chassis 3161A became the property of The West Riding of Yorkshire Fire Brigade. Operating out of Goole until 1951, it was transferred to Keighley thereafter and remained in service for another eighteen years.

After a brief spell in storage the Dennis was bought by Grimsby Fire Brigade as a stop-gap replacement while one of its more modern appliances was being repaired. Grimsby had run a sister machine, `GXA 92', from 1956 - 1968 and so was more than familiar with the Turntable's workings. Although originally intended to be a short-term visitor, `GXA 95' was a firm favourite with crew and public alike and remained on active duty until the 1970s.

Perhaps unsurprisingly given the manner in which they were constructed, circa eleven of the forty-three Dennis Turntable Fire Appliances commissioned by the National Fire Service are thought to have survived. Chassis 3161A has been housed within the prestigious Donington Collection for the past thirty or so years and due to its size will not be attending the auction at The Pavilion Gardens, Buxton. However, the Dennis can be viewed by special arrangement and interested parties are asked to contact the H&H office for further details.

PLEASE NOTE: There are no documents with this vehicle.
Share: